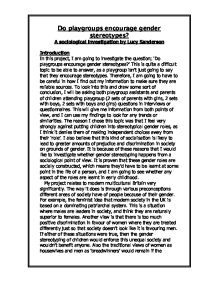 Do playgroups encourage gender stereotypes? A sociological investigation by Lucy Sanderson Introduction In this project, I am going to investigate the question; 'Do playgroups encourage gender stereotypes?' This is quite a difficult topic to be able to answer, as a playgroup isn't just going to say that they encourage stereotypes. Therefore, I am going to have to be careful in how I find out my information to make sure they are reliable sources. To look into this and draw some sort of conclusion, I will be asking both playgroup assistants and parents of children attending playgroup (2 sets of parents with girls, 2 sets with boys, 2 sets with boys and girls) questions in interviews or questionnaires. This will give me information from both points of view, and I can use my findings to look for any trends or similarities. The reason I chose this topic was that I feel very strongly against putting children into stereotypical gender roles, as I think it denies them of making independent choices away from their 'role'. I also believe that this kind of socialisation is likely to lead to greater amounts of prejudice and discrimination in society on grounds of gender. It is because of these reasons that I would like to investigate whether gender stereotyping happens from a sociological point of view. It is proven that these gender roles are socially constructed, which means they'd have to be learnt at some point in the life of a person, and I am going to see whether any aspect of the roles are learnt in early childhood. My project relates to modern multicultural Britain very significantly. The way it does is through various preconceptions different areas of society have of people because of their gender. For example, the feminist idea that modern society in the UK is based on a dominating patriarchal system. This is a situation where males are leaders in society, and think they are naturally superior to females. ...read more.

Results The questionnaires sent to parents of children attending playgroups showed a definite correlation between the sex of the child and the type of things that child liked for all of the children in question. For example, the parents with only boys listed toys like action men, toy cars, toy dinosaurs etc. The parents with only girls listed dolls, play kitchens, toy ponies (one of the two parents mentioned a Thomas the Tank Engine). The parents with both boys and girls mentioned toys that were played by both sexes, for example Harry Potter costumes and Monsters Inc play sets as well as the girls having dolls and fairies and the boys having train sets and cars. None of the parents thought that the playgroups their children went to treated boys and girls differently. The most common response to the question asking whether or not they thought playgroups influenced their children was yes. The parents all said that they thought that the playgroup was a good way to influence children to socialise and learn basic things like numbers and letters. None of the parents saw this question as if it was referring to the possibility of playgroups encouraging gender stereotypes. Only a couple of parents said that they knew what their child wanted to be when they grew up (one little girl wanted to be a ballet dancer and a two little boys wanted to be just like action man) all the rest said that they didn't think that their child understood what growing up meant. A lot of these answers are reflected in the answers from the playgroup leaders. I asked two playgroup leaders the same questionnaire and a lot of their answers were very similar and also coincided with what I saw at the playgroup session that I attended. One of the leaders also told me that all playgroups and nursery are required to have an equal opportunities policy by law so that children weren't forced into a role or any other kind of discrimination. ...read more.

Evaluation My investigation went really well in terms of the information I got. I managed to find lots to write about in my primary and secondary research. I think the questions I asked people covered a wide range of areas in the topic so were really useful. However, if I did do this investigation again, I would be much more specific with my deadlines to receive replies, as this did hold me up for a while. For example, I received the parent questionnaires over the period of about two weeks, and I could not get on to comparing the parents of boys with the parents of girls etc., as I did not have all the information I needed to be able to do this thoroughly straight away. If I did this again, I should have conducted a pilot test on a smaller sample to make sure the questions were sufficient and giving me the information that I needed-luckily, my questionnaires were fine but a good sociologist would have tested their method first. I was trying to save time! Also, the time that I actually conducted my research was difficult to be able to book a session at a playgroup because like school, they have summer holidays and half terms so I had to wait until a recent inset day to be able to attend. However, it all pulled together in the end and I believe that my research went really well and I chose the correct sampling methods for this scale project. To get a broader view on this I would need to interview a larger number of people, and from different areas as this can affect things sociologically. I could also develop this further by specifically looking for different backgrounds of children to see if this affects socialisation, e.g. Single parent families, adopted children. This would take the topic of socialisation and gender roles to a different route than playgroups, but this may make an interesting comparative investigation. ...read more.