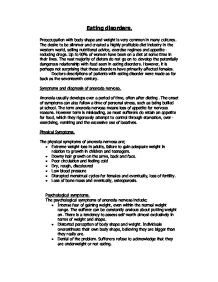 Eating disorders. Preoccupation with body shape and weight is very common in many cultures. The desire to be slimmer and created a highly profitable diet industry in the western world, selling nutritional advice, exercise regimes and appetite-reducing drugs. Up to 90% of women have been on a diet at some time in their lives. The vast majority of dieters do not go on to develop the potentially dangerous relationship with food seen in eating disorders. However, it is perhaps not surprising that these disorders have primarily affected females. Doctors descriptions of patients with eating disorder were made as far back as the seventeenth century. Symptoms and diagnosis of anorexia nervosa. Anorexia usually develops over a period of time, often after dieting. The onset of symptoms can also follow a time of personal stress, such as being bullied at school. The term anorexia nervosa means loss of appetite for nervous reasons. However term is misleading, as most sufferers do retain an appetite for food, which they rigorously attempt to control through starvation, over-exercising, vomiting and the excessive use of laxatives. Physical Symptoms. The physical symptoms of anorexia nervosa are; * Extreme weight loss in adults, failure to gain adequate weight in relation to growth in children and teenagers. * Downy hair growth on the arms, back and face. * Poor circulation and feeling cold * Dry, rough, discoloured * Low blood pressure * Disrupted menstrual cycles for females and eventually, loss of fertility. * Loss of bone mass and eventually, osteoporosis. Psychological symptoms. The psychological symptoms of anorexia nervosa include; * Intense fear of gaining weight, even within the normal weight range. The sufferer can be constantly anxious about putting weight on. There is a tendency to assess self-worth almost exclusively in terms of weight and shape. * Distorted perception of body shape and weight. Individuals overestimate their own body shape, believing they are bigger than they really are. ...read more.

For example they begin to worry about feeling fat. Conclusion - Low levels of the neurotransmitter may be implicated in the onset of bulimia nervosa. Evaluation. Fails to acknowledge other more psychological symptoms in eating disorders such as intense fear of being fat, or behavioural symptoms such as ritualistic eating patterns. Likely that cultural influence may have an impact. Cognitive explanations. Cognitive theories emphasise on the thought processes of a person who an eating disorder - in particular over concern with the importance of body weight and shape. Beck found that people who were having psychological difficulties in life often had unrealistic expectations about themselves. Garner and Bemis have applied some of Beck's theories to eating disorders. Fairburn found that most patients with eating disorders admit they are unlikely to ever be happy with their shape, they are likely to continually suffer from eating disorders and remain unhappy. These distorted thought processes lead the patient to adopt strict, inflexible dietary rules. If the rules are broken for example, by eating the wrong type of food the sufferer will experience a sense of failure and a decrease in self-esteem. In an attempt to feel better, the patient embarks on an even more rigorous diet. Losing weight provides the patient with an objective measure of success. People with anorexia and bulimia not only have distorted attitudes about the importance of body shape, they are also more likely to over estimate their own shape and size. Aim - Zellner investigated women's assessments of their body size. Method - Female participants were given a questionnaire to asses whether they has a distorted attitude towards eating. Women with high scores or low scores were then assessed on their own body size, using line drawings of women with varying body weights. Participants were asked to pick the one closest to their own body shape and choose and ideal figure. Results - High scorers over estimated their own body size and chose a very thin figure as their ideal when compared to low scores. ...read more.

Effectiveness of treatments. Around 70% of people with eating disorders eventually get better. However recovery may take between 6 and 7 years, with frequent relapses. For anorexics maintaining a healthy body weight can have seriously impacts on the sufferers physical health. Where menstrual abnormalities are present over a period of time, there may be permanent infertility. Anorexia can be a life threatening illness and death rates are twice as high for anorexia as for any other psychological disorder. Weight restoration can therefore been seen as highly effective treatment for anorexia because it halts the physical consequences of acute starvation. However other more psychological treatments such as cognitive behavioural therapy may be needed to ensure that the weight gained is maintained. Researchers such as Minuchin as we have seen argue that anorexia is not an individual problem but the result of interpersonal problems within a family. He recommended that treatment included the whole family and not just the anorexic. Fairburn and Cooper outline an effective cognitive behavioural treatment but also stress the importance of family involvement. In particular family members must be advised of the patients goals and be included in strategies to strengthen the patients motivation. Bulimia is often more difficult to detect than anorexia because the sufferer usually maintains a near normal body weight. Bingeing and purging tend to occur in secret. Treatment for bulimia may therefore be delayed, causing the symptoms to get worse over a long period of time. Rowan found that a common time for bulimic women to seek help is when they are planning to start a family and are concerned about the possible effects on having a baby. Whilst there has been some success with anti depressants as a treatment for bulimia, few patients make a full recovery, and disturbed attitudes to shape and weight tend to pursist. A combination of cognitive and behavioural therapy has been effective in challenging these faulty perceptions. However further research is needed to establish if the improvement is maintained over time. ...read more.