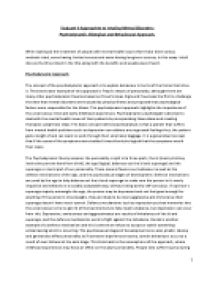 ï»¿Evaluate 3 Approaches to treating Mental Disorders: Psychodynamic, Biological and Behavioural Approach. When looking at the treatment of people with mental health issues there have been various methods tried, some having limited success and some having long term success, in this essay I shall discuss the three listed in the title along with the benefits and weaknesses of each. Psychodynamic Approach: The concept of the psychodynamic approach is to explain behaviour in terms of the forces that drive it. The best known example of this approach is Freud’s theory of personality, although there are many other psychodynamic theories based on Freud’s ideas. Sigmund Freud was the ï¬rst to challenge the view that mental disorders were caused by physical illness and proposed that psychological factors were responsible for the illness. The psychodynamic approach highlights the importance of the unconscious mind and early childhood experiences. Psychodynamic psychologist’s attempt to deal with the mental health issues of their patients by incorporating these ideas and creating therapies using these ideas. The basic concept behind psychoanalysis is that a patient that suffers from mental health problems such as depression can address any regressed feelings thus, the patient gains insight of and can learn to work through their emotional baggage. It is a generalised concept that if the cause of the symptoms were tackled it would only be logical that the symptoms would then cease. The Psychodynamic theory assumes the personality is split into three parts, the id (most primitive, instinctive part we have from birth), the ego (logical, balances out the id and superego) and the superego or moral part of our personality. These areas influence our behaviour as well as the defence mechanisms of the ego, and the psychosexual stages of development. Defence mechanisms are used by the ego to help balance out the id and superego to make sure the person isn’t overly impulsive and behaves in a socially acceptable way, without being overly self-conscious. ...read more.

4. Finally, the client practices encountering the real stimuli. When they feel comfortable with this they move on. The role of the analyst is also important since they need to recognise the reason for the fear. Sometimes this may be irrational but there may also be logical reasons for the fear which need to be dealt with too. Systematic desensitisation is an effective therapy with patients showing much greater recovery than with no therapy, based on a scientifically tested theory it has formed the basis of later behaviourist therapies such as exposure therapy (flooding). Whilst systematic desensitisation is a slow process, research suggests that the longer the technique takes the more effective it is. It has also been shown to have long term benefits. However, systematic desensitisation is limited in use, being used mostly to treat specific anxiety disorders such as phobias. Irrational fears of spiders, buttons etc are seen as relatively trivial disorders in comparison to schizophrenia or bipolar disorder where it has little or nothing to offer. The behaviourist approach does struggle with more serious disorders such as the initial symptoms of schizophrenia which include hallucinations and delusions are internal mental states which the behaviourists ignore in an attempt to create a scientifically testable theory. Aversion therapy: Aversion therapy uses the behavioural approach principles that new behaviour can be 'learnt' in order to overcome addictions, obsessions and violent behaviour. Patients undergoing aversion therapy are made to think of the undesirable experience that they enjoy, for example a violent person might be shown images of violent crime, or an alcoholic might be made to drink, while drugs or electric shocks are administered. In theory the patient will over time come to associate their addiction with the negativity of electric shocks or seizures and has been used to treat a host of undesirable behaviours such as smoking, alcoholism, gambling, violence and homosexuality when it was considered a mental illness. ...read more.

Weaknesses: One of the major weaknesses of the model is the side effects associated with drug or chemotherapy, as previously mentioned when outlining the different classes of drugs available. Most of these drugs can also cause dependency where people cannot cope without them and in some cases tolerance where the drugs actually have little or no effect. It?s also important to note that some other therapies may be ignored as busy doctors will prescribe medication rather than seek alternative means of helping the patient cope, in some cases people suffering from the stresses of daily life may be prescribed medication when exercise or relaxation could be more effective. Drug therapy also does not work for everyone such as people suffering from negative symptoms of schizophrenia where they have motivation or as it is more commonly known as Flatness of affect Another weakness of the biological model is that it focuses too much on the 'nature' side of the nature v nurture debate. It argues that behaviour is caused by hormones, neurotransmitters and genetics. One theory is that schizophrenia is genetic, however, Bouchard and McGue (1981) twin studies show that it is not completely genetic and the environment has a part to play. Another weakness of the biological approach is that it develops theories about disorders and generalises them to apply to everyone. It does not take into account the view that humans are unique. An example of this is that General Adaptation Syndrome assumes that everyone responds in the same way to stress but does not take into account that some people have more support than others. Szasz criticised drug treatment as inappropriate, rather people had a problem with living and therefore pills weren?t the solution. Conclusion: Whilst all the approaches have been criticised, they all offer some form of therapy which has positive benefits for the patient and more importantly in some cases have worked hand in hand with other therapies to help people live better lives. None of them can be overlooked as they are beneficial to some extent. ...read more.