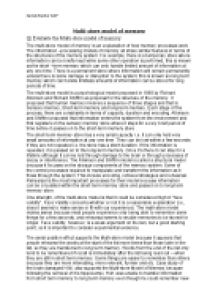 Evaluate the Multi-store model of memory.

The Atkinson and Shiffrin model is called a structural model because it focuses on the storage components of the memory system. Some of the control processes required to manipulate and transform the information as it flows through the system .This include encoding, retrieval strategies and rehearsal. Rehearsal is the most important processes for their model because information can be circulated within the short-term memory store and passed on to long-term memory store. One strength, of the multi-store model is that it could be considered high in "face validity". Face Validity concerns whether or not it is a reasonable explanation (i.e., does it seems to make sense or fit with our experience). The multi-store model makes sense because most people experience only being able to remember some things for a few seconds, and rehearsal seems to enable memories to be stored for longer. ...read more.

One weakness, of the multi-store model is a case study of brain damaged participants such as Clive Wearing show that the Multi-store Model is an overview of how memory actually works. Clive Wearing suffered brain damage to many brain areas, including his hippocampi, when the herpes simplex virus attacked his brain. Clive was similar to H.M. in that he could not remember new information for more than a few seconds; however, he could learn new skills. This suggests that there is a separate long term memory for skills (Procedural Memory). Clive could also remember facts about his life previous to the illness, but could not remember any experiences. This meant that repeatedly had revelations that he was conscious for the first time. This suggests that there are separate long term memory stores for facts (semantic memory) and experiences (episodic memory). ...read more.