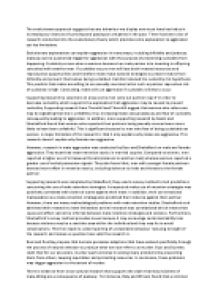 Evolutionary explanations can explain aggression in many ways, including infidelity and jealousy

﻿The evolutionary approach suggests that any behaviour we display now must have had value in increasing our chances of surviving and passing on are genes in the past. There has been a lot of research conducted into the evolutionary theory which provides some explanation to aggression yet has limitations. Evolutionary explanations can explain aggression in many ways, including infidelity and jealousy. Jealousy can be a potential trigger for aggression with the purpose of preventing cuckoldry from happening. Cuckoldry occurs when a women deceives her male partner into investing in offspring conceived with another man. If cuckoldry occurs men will lose both invested resources and reproductive opportunities and therefore males have evolved strategies to prevent mates from infidelity and prevent themselves being cuckolded. Camilleri devised the cuckoldry risk hypothesis. This predicts that males are willing to use s******y coercive tactics such as partner r**e when risk of cuckoldry is high. Concluding, males will use aggression if cuckoldry is likely to occur. Supporting research by Lalumiere et al say some men carry out partner r**e if in order to decrease cuckoldry which supports the explanation that aggression may be caused to prevent cuckoldry. ...read more.

Supporting research was completed by Shakelford; they used a survey method to test predictions concerning the use of male retention strategies. As expected males use of retention strategies was positively correlated with violence scores against their mate. In addition, their use emotional manipulation as a mate-retention strategy also predicted their violence against their partner. However, there are many methodological problems with male retention studies. Shackelford et al admitted their research to have limitations as their research was correlational which means that cause and effect cannot be inferred between male retention strategies and violence. Furthermore, Shackelford?s survey method provides issues because it may encourage social desirability bias because violence may be a sensitive area within the individual and they may lie to avoid complications. This then leads to underreporting of undesirable behaviour reducing strength of the research and makes us question how valid the research is. Buss and Duntley propose that humans possesses adaptions that have evolved specifically through the process of natural selection to produce what we now refer to as murder. ...read more.

Similarly, the approach androcentric; the majority of research is with men and doesn?t explain why some females can be aggressive. Moreover, the approach is also deterministic because it assumes that all aggression is down to genetics and doesn?t take into consideration free will and how some events may make people angrier consequently leading to aggression. And lastly, the approach has socially sensitive research. By concluding that aggression is caused by aggression it may affect crime sentencing by reducing the punishment; this then has consequences for society. In conclusion, the evolutionary explanation is weak. It fails to consider a large number of other factors and approaches that could also be the cause of aggression. For instance, the approach fails to consider any factors from approaches such as the social learning theory which suggests that aggression is caused not only by inherited factors but also environmental factors such as reproduction which is copying (aggressive) behaviour you have witnessed. Despite being very reductionistic, the approach does have a lot of supporting research for how jealousy can be a cause for aggression but is mainly male focused and therefore cannot explain why everyone is aggressive. ...read more.