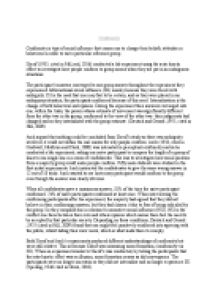 ï»¿Conformity Conformity is type of social influence that causes one to change their beliefs, attitudes or behaviour in order to suit a particular reference group. Sherif (1935, cited in McLeod, 2016) conducted a lab experiment using the auto-kinetic effect to investigate how people conform to group norms when they are put in an ambiguous situations. The participant’s answers converged to one group answer throughout the experiment they experienced Informational social influence (ISI) mainly because they were faced with ambiguity. ISI is the need that one may feel to be certain, and as they were placed in an ambiguous situation, the participants conformed because of this need. Internalisation is the change of both behaviour and opinion. During the experiment their answers converged into one, within the trials, the person whose estimate of movement was significantly different from the other two in the group, conformed to the view of the other two. their judgments had changed and so they internalised with the group estimate. (Deutsch and Gerard ,1955, cited in Hill, 2009) Asch argued that nothing could be concluded from Sherif’s study as there was ambiguity involved; it could not define the real reason for why people conform. Asch (1956, cited in Cardwell, Meldrum and Clark, 2000) was interested in perceptual conformity and so he conducted a lab experiment, asking one naïve participant to compare the length of a group of lines to one single line in a room of confederates. ...read more.

(McLeod, 2016) Asch also had very good reliability as results were measured many times and consistency was found. Although, both experiments lacked ecologically validity as the experiments were conducted in a lab which was very controlled and unrealistic. However, as previously mentioned, the control was needed to strengthen the internal validity. Both experiments were androcentric and had low population validity as only young American students were involved, so results cannot be generalised to other cultures, ages and females. They had also crossed ethical boundaries, such as deception. Asch told the participants that the test was on visual perception and Sherif asked to measure distance when there wasn?t any. However, without deception results could be invalidated as participant will form biased judgments by not wanting to conform, some argue that it was justified. Participants during the interviews of Asch?s experiments reported signs of stress and suffered from low self-esteem. (Asch 1956, cited in Cardwell, Meldrum and Clark, 2000) This proves that they were not protected from harm. However It also may be true that this stress factor may be a driving agent of conformity, can it really be eradicated during a conformity study? Referent informational influence is another reason for why people conform. They acknowledge themselves as being a member of a group (I.e. Students, work colleagues) ...read more.

Comparing these two studies, two things can be concluded, one being that the SPE may lack internal validity, was the effect of conforming to social roles really being examined or was it an example of authoritarianism dictated by Zimbardo himself? Or that the BBC prison study had good population validity as there sample included volunteers recruited through advertisement, which would make the study generalizable, but however seems to lacks internal and ecological validity due to focussing on the ethics and structure of the experiment and the internal validity may be questions as conformity was not observed among the participants, so was it really a test on conformity? There are many reasons for why we conform. We don?t always conform due to ISI and NSI sometimes they can work as one, as Insko et al?s study suggests, as the determined condition produced greater conformity in both private and public conditions, due to the effect of both ISI an NSI. It is also true that one may conform due to their sense of belongingness to a group and Crutchfeild?s theory concluded that individual differences is also a factor of conformity, as he found that certain personalities were more likely to conform than others, I.e. lack of intelligence or having less ego strength can make a person more likely to conform due to lack of competency or confidence. (Crutchfield 1955, cited in Hill, 2009) By taking into consideration all these factors, it can be concluded that conformity is ambiguous and cannot be defined on its own. ...read more.