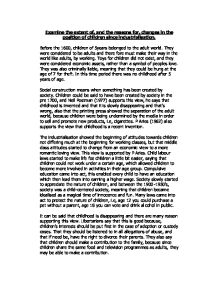 Examine the extent of, and the reasons for, changes in the position of children since industrialisation.

Examine the extent of, and the reasons for, changes in the position of children since industrialisation. Before the 1600, children of 5years belonged to the adult world. They were considered to be adults and there fore must make their way in the world like adults, by working. Toys for children did not exist, and they were considered economic assets, rather than a symbol of peoples love. They was also criminally liable, meaning that they could be hung at the age of 7 for theft. In this time period there was no childhood after 5 years of age. Social construction means when something has been created by society. Children could be said to have been created by society in the pre 1700, and Neil Postman (1977) supports this view, he says that childhood is invented and that it is slowly disappearing and that's wrong, also that the printing press showed the separation of the adult world, because children were being undermined by the media in order to sell and promote new products, i.e, cigarettes. ...read more.

It can be said that childhood is disappearing and there are many reason supporting this view. Libertarians say that this is good because, children's interests should be put first in the case of adoption or custody cases. That they should be listened to in all allegations of abuse, and that if need be, have the right to divorce their parents. They also say that children should make a contribution to the family, because since children share the same food and television programmes as adults, they may be able to make a contribution. There are also people who think that childhood disappearing is a bad thing, they are the New Right thinkers. They say that because of the media know all the secrets of the adult world, also through the Internet. That they need more protection from abuse and exposure of inappropriate material, because they have easy access in our society. ...read more.

Also toys can be seen to amplify gender roles and to commercialise the childhood, because boys will be seen to only play with cars and trucks and girls to play with only dolls and dress up, and that they two cannot mix. They also say that children should not be protected from the realities of life, i.e, death and war, that they should have the free will and right to see what they want to see. I think on my personal opinion, that childhood disappearing is a bad thing because it can be harmful to both the child, parent and also the society, because from a psychological point of view, if childhood disappears, so does the close emotional bonds between the child and the parent. I think that society would suffer from the deprivation of childhood because everybody at some point engaged in the period of childhood, and depriving society of that influential time could be hazardous. ...read more.

The writer has covered the essay topic but has provided little evidence for the changes in the position of children since industrialisation. Few dates are given or references. The writer seems to have an understanding of the differing views of childhood, but there needs to be much more detail in order to improve the essay.