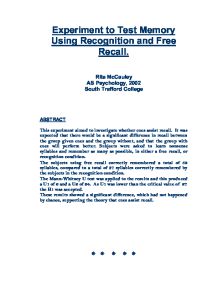 Experiment to Test Memory Using Recognition and Free Recall. Rita McCauley AS Psychology, 2002 South Trafford College ABSTRACT This experiment aimed to investigate whether cues assist recall. It was expected that there would be a significant difference in recall between the group given cues and the group without, and that the group with cues will perform better. Subjects were asked to learn nonsense syllables and remember as many as possible, in either a free recall, or recognition condition. The subjects using free recall correctly remembered a total of 52 syllables, compared to a total of 87 syllables correctly remembered by the subjects in the recognition condition. The Mann-Whitney U test was applied to the results and this produced a U1 of 6 and a U2 of 94. As U1 was lower than the critical value of 27 the H1 was accepted. These results showed a significant difference, which had not happened by chance, supporting the theory that cues assist recall. * * * * * BACKGROUND One of the theories of forgetting is failure to retrieve. According to Tulving, accessibility is governed by retrieval cues. These can be internal, such as psychological or physiological states, or external such as the environment, context or written cues. Tulver and Osler 1968 paired specific associated cue words with a list to be learned, (at the time of learning) ...read more.

The syllables were selected randomly. See Appendix 1. 2.) Blank paper for free recall condition. 3.) Sheet with target syllables mixed with distractor syllables, for recognition condition. See appendix 2 4.) Watch. 5.) Pen. Procedure: Free recall condition 1. The subject was given the list of 20 syllables (App. 1), and asked to read the instructions. 2. After two minutes the paper was removed. 3. They were asked to write down as many syllables as they could remember. They were given minutes to do this. 4 This procedure was repeated with 9 more subjects. Recognition Condition 1. As in the free recall condition. 2. " " 3. Subjects were given a sheet with the target and distractor items mixed together, (app.2). They were given 5 minutes tick off the recognised syllables as directed at the head of the sheet. After 5 minutes the paper was removed. All subjects were debriefed on completion. RESULTS A Table Showing the Number of Words Recalled Correctly by Participants in the Free Recall and Recognition Conditions. No. of syllables Recalled correctly Free recall Frequency Recognition Frequency 1 1 1 4 111 12 5 111 15 6 1 6 7 1 7 8 11 16 9 1 9 10 111 30 11 1 11 12 111 36 16 1 16 Total frequency = 52 Total frequency = 107 Results continued For graph see appendix ...read more.

Whilst conducting the experiment the need for further controls became apparent. These included isolation of the subject whilst learning and recalling, as interruptions and knowing they were being watched and possibly judged by others was at times obviously distracting. The age and gender of subjects was not controlled for. It would be improved by having equal number of each gender and subjects from age categories in both conditions. This has implications regarding how witnesses are questions and assisted with recall. Approaches such as taking them back to the site of an event, producing pictures or other material in order to tease out memories that are temporarily lost, and not readily accepting their genuine belief that they cannot remember, should all be adopted according to these findings. The way exam questions are presented and where they are taken is also crucial according to these findings. If an exam requires total free recall it is setting limits of only measuring retrieval under cueless conditions. This could produce strikingly different results from the same student at any given moment than in a condition providing even a minimal amount of cues. Future experiments might include varying the time elapsing between learning and recall or to include performing an interference task. It would also have been interesting to give the free recall group the recognition sheet immediately after finishing free recall, to see how many new syllables they recognised. ...read more.