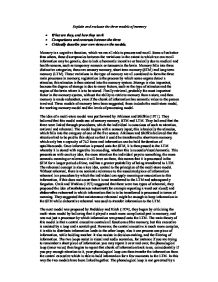 Explain and evaluate the three models of memory.

Explain and evaluate the three models of memory * What are they, and how they work * Comparisons and contrasts between the three * Critically describe your own views on the models. Memory is a cognitive function, which we are all able to process and recall. Some of us better than others, these discrepancies between the variations in the extent to which we can recall information may be genetic, due to lack of semantic incentive or basically due to medical and health reasons, such as temporary amnesia or tumours in the brain. Memory falls into three distinctive categories; these are sensory memory, short-term memory (STM) and long-term memory (LTM). These variations in the type of memory are all combined to form the three main processes in memory; registration is the process by which sense organs detect a stimulus, this stimulus is then entered into the memory system. Storage is also important, because the degree of storage is due to many factors, such as the type of stimulus and the region of the brain where it is to be stored. Finally retrieval, probably the most important factor in the memory system, without the ability to retrieve memory from a store, and then memory is made redundant, even if the chunk of information has semantic value to the person involved. ...read more.

The levels of processing model, works down a gradient of sense, for instance there are three levels on which Craik and Lockhart believed that information would be remembered, they are structure, phonological and semantic. By structural we mean, you will remember things that you have physically seen, e.g. the shape of an apple. Phonological represents, acoustic information, e.g. your favourite song being played, and you being able to recall the words. This works with the other two models, the multi-store would say that you have paid attention to the lyrics and then tried to rehearse them, meaning that you have an active knowledge or memory of the lyrics. The working memory may assume that the phonological loop has a store of the lyrics, which after being repeated numerous times has been passed onto the LTM. The type of information, which will be recalled most easily, is the information that is semantically coded, such as memories of birthdays, or an experience that may have affected you. This is because it has personal meaning, and takes priority over other normal mundane things like objects and sounds. The three models can be contrasted more than they can be compared. The multi-store model relies to heavily on the ideas of rehearsal and attention, also that the STM is the direct route to the LTM, but studies have shown that the STM can be damaged, but this can lead ...read more.

First hand experience indicates that the more attention you pay to something and the more semantic meaning it has to you the easier you will be able to recall it, (when revising for examinations, I find it easier to recall something that I understand.) But I do agree with the idea that the working model demonstrates of scratch pads and loops, which help to retain to information, there have been many incidents when I have experienced these two utilities. The idea of the central executive being able to make decisions is also an interesting factor, but it is accepted that the attentional processes of the STM and central executive are the same. I do not really agree with the levels of processing model, it is not as comprehensive as the other two models, and basically states the blindingly obvious in stating that you will remember semantic information more easily than any other information. Another observation is that none of the other models seem to consider the idea of sensory memory, thus providing no logical idea for where the information comes from. After studying and considering all three models I believe that the multi-store seems to be the superlative, because it shows more logical progression, and it a model that has minimal criticism. Even with the use of models, memory is something that is hard to quantify it remains a mystery why some people have better memories than others; this is something, which psychology and biological sciences could determine. ...read more.