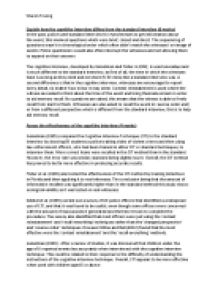 ﻿Steven Truong Explain how the cognitive interview differs from the standard interview (6 marks) In the past, police used standard interview for eyewitnesses to get information about the event, this involved questions which were brief, closed and direct. The sequencing of questions wasn?t in chronological order which often didn?t match the witnesses? on image of events. Police questioners would also often interrupt the witnesses and not allowing them to expand on their answers The cognitive interview, developed by Geiselman and Fisher in 1992, is used nowadays and is much different to the standard interview, as first of all, the time in which the witnesses have is as long as they need and not short (5-30 mins) ...read more.

Witnesses are also asked to recall the event in reverse order and/or from a different perspective which is different from the standard interview, this is to help aid memory recall. Assess the effectiveness of the cognitive interview (4 marks) Geiselman (1985) compared the Cognitive Interview Technique (CIT) to the standard interview by showing 89 students a police training video of violent crimes and then using law enforcement officers, who had been trained in either CIT or standard techniques, to interview them. More correct items were recalled in the CIT method than in the standard. However, the error rate was similar; standard being slightly lower. ...read more.

The survey also identified that most officers were just using the 'context reinstatement' and 'recall everything' techniques rather than the 'changed perspective' and 'reverse order' techniques. However Milne and Bull (2002) found that the most effective were the 'context reinstatement' and the 'recall everything' methods. Geiselman (1999): After a review of studies, it was discovered that children under the age of 6 reported events less accurately when interviewed with the cognitive interview technique. This could be related to their response to the difficulty of understanding the instructions of the cognitive interview technique. Overall, CIT appears to be more effective when used with children aged 8 or above. ...read more.