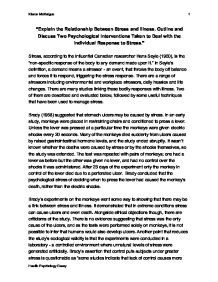 Explain the Relationship Between Stress and Illness

"Explain the Relationship Between Stress and Illness. Outline and Discuss Two Psychological Interventions Taken to Deal with the Individual Response to Stress." Stress, according to the influential Canadian researcher Hans Seyle (1950), is the "non-specific response of the body to any demand made upon it." In Seyle's definition, a demand means a stressor - an event, that throws the body off balance and forces it to respond, triggering the stress response. There are a range of stressors including environmental and workplace stressors, daily hassles and life changes. There are many studies linking these bodily responses with illness. Two of them are described and evaluated below, followed by some useful techniques that have been used to manage stress. Brady (1958) suggested that stomach ulcers may be caused by stress. In an early study, monkeys were placed in restraining chairs and conditioned to press a lever. Unless the lever was pressed at a particular time the monkeys were given electric shocks every 20 seconds. Many of the monkeys died suddenly from ulcers caused by raised gastrointestinal hormone levels, and the study ended abruptly. It wasn't known whether the deaths were caused by stress or by the shocks themselves, so the study was extended. ...read more.

It used a large number of well-chosen participants; Frisdman & Rosenman selected the gender and age-group most at risk from CHD. The study was able to assess and identify a higher-risk group which may be useful for CHD prevention. For example, if people are aware that they have a higher chance of developing heart disease they may take steps to modify their behavior e.g. by taking up exercise or giving up smoking. However, their study is vague and lacks precision. Many traits were measured to assess whether a participant has a Type A personality and it is unclear which of these is specifically linked to CHD; when analysing the original data, Chesney, Hecker et al (1988) suggested that "anger and hostility were the major predictors of CHD." (Coolhan et al, 1996). Although there seems to be a link, the relationship between stress and heart disease is far from straightforward. There are a number of stress management techniques. Two methods, one physiological and one psychological, are outlined here, along with analysis of their benefits and drawbacks. Biofeedback, according to Gatchel (1997), is "a technique for transforming some aspect of physiological behavior into electrical signals which are made accessible" (Eysenck, 2000). ...read more.

The method can help improve self-confidence and, like biofeedback, can provide a sense of control. However, it is hard to imagine the theory being applied when treating a highly stressed individual. Some of the methods taught in phase 2 of Stress Inoculation Training would only be effective if there was prior knowledge of a stressful situation. It is possible, for example, to "psych" yourself up for an event, such as an exam, but what happens if stress arises suddenly, without time for prior thought? Another consideration is that individuals differ in how easy they find it to use coping self-statements in stressful situations. To conclude, there is almost certainly a strong link between stress and illnesses such as ulcers and heart disease, though individual differences mean that stressors effect people differently. Biofeedback and Stress Inoculation Training are two methods that can be used to manage stress, though again this would depend on the level and type of stress, as well as the individual. It is possible that a number of stress management techniques could be used in conjunction with one other, or that a therapist might assess an individual before deciding which method(s) are appropriate. It seems apparent that, although some excellent research has been conducted, it will be a long time before the relationship between stress and illness is fully understood. ...read more.