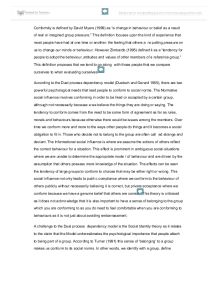 Explanations of conformity. Conformity is defined by David Myers (1999) as a change in behaviour or belief as a result of real or imagined group pressure.

Conformity is defined by David Myers (1999) as "a change in behaviour or belief as a result of real or imagined group pressure." This definition focuses upon the kind of experience that most people have had at one time or another: the feeling that others are putting pressure on us to change our minds or behaviour. However Zimbardo (1995) defined it as a "tendency for people to adopt the behaviour, attitudes and values of other members of a reference group." This definition proposes that we tend to go along with those people that we compare ourselves to when evaluating ourselves. According to the Duel process dependency model (Duetsch and Gerard 1955), there are two powerful psychological needs that lead people to conform to social norms. The Normative social influence involves conforming in order to be liked or accepted by a certain group, although not necessarily because a we believe the things they are doing or saying. The tendency to conform comes from the need to be some form of agreement as far as rules, morals and behaviours because otherwise there would be issues among the members. ...read more.

A challenge to the Dual process dependency model is the Social Identity theory as it relates to the claim that the Model underestimates the psychological importance that people attach to being part of a group. According to Turner (1991) this sense of 'belonging' to a group makes us conform to its social norms. In other words, we identify with a group, define ourselves as having category membership and then adopt the values of that group. For example, moving from a school to university and defining yourself as a student, observing how other students conduct themselves and behaving in a similar way is caused by a process called referential informational influence and Turner proposed that there were three stages involved in this process. The first stage is where individuals acknowledge their membership of the group; the second stage is where they then learn the group's norms and the final stage is where they behave according to these norms. Therefore, reverent social influence sets the conditions for normative and informational influence to be most effective. ...read more.

Moscovici proposed that minorities produce a greater amount of cognitive activity that majorities. However, Martin (2006), looked at the effects of in-groups and out-group minorities on private and public levels of influence and found that in-groups have more influence in public however out-groups have a much, maybe even more, influence in private. He concluded that the effects of internalisation may be masked as people don't want to publically align themselves with an out-group. Another criticism of Mascovici's theory is by Mackie (1987) who claimed that we process more information about majority- false consensus effect. Another explanation of conformity is the Social Crypto Amnesia effect when a group cannot remember when the majority was once the minority. This is when conversion takes place when the Zeitgeist has changed and by the time the change has occurred people have forgotten the original source of the change but it is actually due to the minority influence creating a Snowball effect which was created by Van Avermaet (1996). The Snowball effect is when the minority becomes the majority after people begin to agree with the minority. ...read more.

The description of the various explanations in this essay starts very well, and there is some analysis through contrasting explanations.
The second half may not be considered relevant by an examiner though, unless the question asks for a comparison of majority and minority influence. Instead, there could have been discussion of Kelman's types of conformity and how these interact with normative and informational influence.
It is interesting that the writer has not chosen to discuss any research evidence for the theories - this would be a successful alternative approach to evaluation. Studies such as Asch, Sherif and Crutchfield could be used to illustrate the different processes and draw out issues with the explanations. It would also benefit from some real life examples to show how the explanations work in practice.
Ultimately, despite the accuracy of much of the description, this essay lacks analysis, possibly because there wasn't an analytical title.