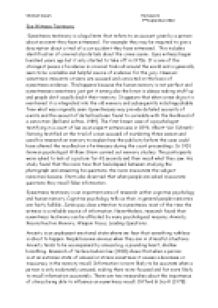 Eyewitness testimony is an important area of research within cognitive psychology and human memory.

﻿Shinbert Aisam Homework 7th September 2012 Eye Witness Testimony Eyewitness testimony is a legal term that refers to an account given by a person about an event they have witnessed. For example they may be required to give a description about a trail of a car accident they have witnessed. This includes identification of criminal also details about the crime scene. Eyes witness began hundred years ago but it only started to take off in 1970s. It is one of the strongest pieces of evidence in criminal trials all around the world and is generally seen to be a reliable and helpful source of evidence for the jury. However sometimes innocents citizens are accused and convicted on the basis of eyewitness evidence. This happens because the human memory is not perfect and eyewitnesses sometimes just get it wrong also the brain is always making stuff up and people don?t usually doubt their memory. It appears that when a new object is mentioned it is integrated into the old memory and subsequently indistinguishable from what was originally seen. Eyewitnesses may provide detailed accounts of events and the amount of detail has been found to correlate with the likelihood of a conviction (Bell and Loftus, 1989). ...read more.

it had no effect on their memory about the incident but the research shows that the witnesses that experienced levels of stress were actually closer to the event therefore this might have helped the accuracy of the memory recall. Reconstructive memory is the process of putting information together based on general types of stored knowledge in the absence of a specific memory representation. Bartlett says that the human memory is an active process, according to Bartlett research people organise their memories in a way that fits their previous experience, when we remember events the gaps in our memory are reconstructed based on our schema, a way of organizing information. This allows people to make sense of what they saw and how to deal with the situation. Therefore when people find themselves in a situation they don?t understand or doesn?t fit their social values they change it in order to fit their schema. Therefore schemas can mislead information and result in an unreliable eyewitness testimony. Bartlett research was called War of Ghost from a Native American culture participants were British who shared norms and values would differ greatly from that of a Native American. ...read more.

However eyewitnesses testimonies are still one of the strongest pieces of evidence used in the court system today and are accepted as fact by a jury. When eyewitness accounts are correct it can help convict many guilty people but often an incorrect eyewitness testimony can lead to wrongful convictions and severely damage a person?s life. Looking at research carried out it would appear that there are many factors that can contribute to an unreliable eyewitness testimony. Eyewitness testimonies can be flawed simply by the natural memory processes that occur when people retain and attempt to retrieve information (Loftus, 1979). Eyewitness testimony can be affected by weapon focus leading questions and perception and memory, to name but a few. When looking at the results of research carried out and the serious implications of the validity of eyewitness testimonies, it is surprising to see that despite the Devlin Report, 1976 and Court of Appeal in Turnbull (1977), convictions are still being obtained on the unsupported evidence of a sole eyewitness. In the courtroom, perhaps, more emphasis should be placed on the pitfalls involved with eyewitness accounts when advocates and/or judges are addressing juries. Since 1976 till the present day police line ups have increased. In conclusion Loftus has shown how language and wording could influence a person?s recall of an incident. ...read more.