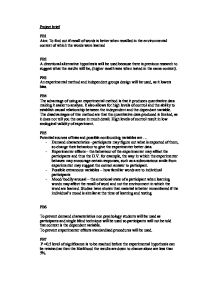 Project brief PB1 Aim: To find out if recall of words is better when recalled in the environmental context of which the words were learned PB2 A directional alternative hypothesis will be used because there is previous research to suggest what the results will be, (higher recall rates when tested in the same context). PB3 An experimental method and independent groups design will be used, as it lowers bias. PB4 The advantage of using an experimental method is that it produces quantitative data making it easier to analyse. It also allows for high levels of control and the ability to establish causal relationship between the independent and the dependant variable. The disadvantages of this method are that the quantitative data produced is limited, as it does not tell you the cause in much detail. High levels of control result in low ecological validity of experiment. PB5 Potential sources of bias and possible confounding variables are ... - Demand characteristics - participants may figure out what is expected of them, so change their behaviour to give the experimenter better data. - Experimenter effects - the behaviour of the experimenter may affect the participants and thus the D.V. for example, the way in which the experimenter behaves may encourage certain responses, such as a subconscious smile from experimenter may suggest the correct answer to participant. - Possible extraneous variables - how familiar words are to individual participants - Mood/ bodily arousal - the emotional state of a participant when learning words may affect the recall of word and not the environment in which the word are learned. Studies have shown that material is better remembered if the individual's mood is similar at the time of learning and testing PB6 To prevent demand characteristics non psychology students will be used as participants and single blind technique will be used so participants will not be told that context is the dependant variable. ...read more.

Baddeley and Godden had the participants in four conditions: land/land, land/water, water/land and water/water. If the participant was on land s/he sat near the water in their scuba gear after just finishing up with a regularly scheduled dive. This assured that all participants were wet and cold. Baddeley and Godden (1975) found that material was best remembered when the context was the same at the learning and testing condition. This research is important to the proposed experiment because the study is well known, and the proposed research will follow a similar design, modeled after Hardman & Miles (1998) and Baddeley & Godden (1975 A proposed explanation of context-dependency is the ICE Theory (Malmberg, Murnane, & Phelps, 1999). Each letter in the acronym ICE stands for a different type of context-dependent memory. The "I" represents item information, which is the information in a person's surrounding environment that is essential to the cognitive task. Contextual information, represented by "C", is the information in the environment that is not used for the cognitive task at hand. Unlike item information which is important to the actual processing of the cognitive task, context information is not as important; it is merely the information surrounding the person performing the task. The letter "E" in ICE signifies ensemble information. Ensemble information, produced by a combination of item and context information can be created in either the learning or retrieval stage. These three components are important to understanding how context-dependent memory works. When the type of context is the focus of what a person is trying to learn (item), s/he is able to remember the target in both the learning context and the new context. When a person uses context information from the surrounding environment and not just as the target focus, s/he can remember the targets and distractions when in the learning context, but s/he does not remember either in the new context. ...read more.