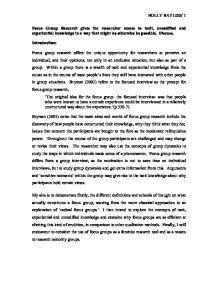 Focus Group Research gives the researcher access to tacit, uncodified and experiential knowledge in a way that might no otherwise be possible - Discuss.

Focus Group Research gives the researcher access to tacit, uncodified and experiential knowledge in a way that might no otherwise be possible. Discuss. Introduction: Focus group research offers the unique opportunity for researchers to perceive an individual, and their opinions, not only in an exclusive situation, but also as part of a group. Within a group there is a wealth of tacit and experiential knowledge from the outset as in the course of most people's lives they will have interacted with other people in group situations. Bryman (2001) refers to the focused interview as the precept for focus group research, 'The original idea for the focus group- the focused interview- was that people who were known to have a certain experience could be interviewed in a relatively unstructured way about the experience.'(p.336-7) Bryman (2001) notes that the main aims and merits of focus group research include the discovery of how people have constructed their knowledge, why they think what they do; Issues that concern the participants are bought to the fore as the moderator relinquishes power. Throughout the course of the group participants are challenged and may change or revise their views. The researcher may also use the concepts of group dynamics to study the ways in which individuals make sense of a phenomenon. Focus group research differs from a group interview, as the motivation is not to save time on individual interviews, but to study group dynamics and get extra information from this. Arguments and 'sensitive moments' within the group may give rise to the tacit knowledge about why participants hold certain views. My aim is to demonstrate firstly, the different definitions and schools of thought on what actually constitutes a focus group, moving from the more classical approaches to an exploration of 'radical focus groups.' I then intend to explore the concepts of tacit, experiential and uncodified knowledge and examine why focus groups are so efficient at eliciting this kind of erudition, in comparison to other qualitative methods. ...read more.

It is for this reason that focus group moderators will spend time early in the group discussion seeking common experiences among group members before moving on to more controversial topics' (p.42). Building this sense of comfort and security is fundamental in ensuring the acquisition of different types of knowledge. The facilitator must also be aware of the participants' perceptions of each other, 'Certain participants, however, may be perceived to have expert power because of their education, training, and/or general experience' (ibid.p.44). This may lead to a certain amount of intimidation that needs to be overcome to obtain valuable knowledge from other individuals in the group. The moderator must also be sensitive to the non-verbal communication, such as 'gazing and eye contact.' Stewart and Shandasani (1990) note that there are '3 primary functions of looking within the interpersonal interaction situation (1) to express interpersonal attitudes such as friendship, agreement or liking; (2) to collect information about other persons, such as how they are responding to a particular point of view; and (3) to regulate and synchronize dyactic conversations' (p.44). These are actions, which the researcher not only desires to recognise among the participants, but can also use to encourage participation and self-assurance. Focus groups were used in the research of O'Brien into gay and bisexual attitudes towards AIDS and other s****l diseases. She decided on this method to ensure that she would be able to learn and reproduce the vocabulary of these groups to ensure the message of safe s*x was communicated in an effective and inoffensive manner. 'O'Brien used the tacit knowledge opened up by the focus group discussions to produce fresh hypotheses concerning the significance of verbal and non-verbal modes of communication for the practice of safe s*x.' (A. Johnson, 1996 p.522) O'Brien noted that the information gathered transpired as a result of 'meaningful multilateral conversations,' which although initiated by the controlled bilateral questions of the researcher, developed independently of her own aims for the direction of the discussion. ...read more.

Farquhar observes that through using focus groups, the researcher not only gains access to tacit information, but also information that has previously been withheld or overlooked. 'Group methods can make an important contribution to sensitive research. They can be helpful in facilitating access to particularly sensitive research populations, and giving voice to sections of the community who frequently remain unheard... by bringing discussion of sensitive topics into a relatively public arena, they may open up new possibilities for the analysis of the social construction of sensitivity, and the identification and illumination of such group norms and taboos' (p.62). Conclusion: Hellgren (1988) notes that focus groups not only give rise to tacit, uncodified and experiential knowledge, but also allow the researcher to learn the vocabulary the participants use to describe their own experiences. This knowledge of terminology can then inform other research methods aimed at the demographic, gender, ethnic etc. group. 'With this information, the investigator can design a questionnaire using words and phrases to enhance respondents' understanding and hence, to enhance data quality' (p.523). The presence of official research into the areas of tacit and uncodified knowledge can then lead to 'institutionalising' this type of knowledge and increase the recognition and inclusion in research of those groups for whom uncodified knowledge is most poignant. The fact that group dynamics exist and that conversations within the group occur at all demonstrate the groups tacit and experiential knowledge of how to behave within a group situation and how to conduct a conversation, which itself has an unwritten set of rules, that prevents participants from continually talking over each other and constantly interrupting. Thus, even within the traditional literature there was a tacit acceptance of experiential knowledge that prevented them from briefing participants on how to perform within the group. I perceive focus groups as being such an effective and tolerant research method as they do not simply aim to elicit an accepted and rigid set of facts, but seek to observe an organic and developing expression and creation of experiential opinions. ...read more.