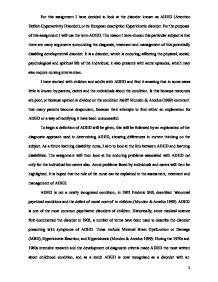 For this assignment I have decided to look at the disorder known as ADHD (Attention Deficit-Hyperactivity Disorder), or its European description Hyperkinetic disorder.

For this assignment I have decided to look at the disorder known as ADHD (Attention Deficit-Hyperactivity Disorder), or its European description Hyperkinetic disorder. For the purposes of this assignment I will use the term ADHD. The reason I have chosen this particular subject is that there are many arguments surrounding the diagnosis, treatment and management of this potentially disabling developmental disorder. It is a disorder, which is enduring; affecting the physical, social, psychological and spiritual life of the individual, it also presents with acute episodes, which may also require nursing intervention. I have worked with children and adults with ADHD and find it amazing that in some cases little is known by parents, carers and the individuals about the condition. Is this because resources are poor, or because opinion is divided on the condition itself? Munden & Arcelus (1999) comment that many parents become despondent, because their attempts to find either an explanation for ADHD or a way of rectifying it have been unsuccessful. To begin a definition of ADHD will be given, this will be followed by an explanation of the diagnostic approach used in determining ADHD, showing differences in current thinking on the subject. As a future learning disability nurse, I aim to look at the link between ADHD and learning disabilities. The assignment will then look at the enduring problems associated with ADHD not only for the individual but carers also. Acute problems faced by individuals and carers will then be highlighted. It is hoped that the role of the nurse can be explained in the assessment, treatment and management of ADHD. ADHD is not a newly recognised condition, in 1902 Frederic Still, described 'abnormal psychical conditions and the deficit of moral control' in children (Munden & Arcelus 1999). ADHD is one of the most common psychiatric disorders of children. Historically, since medical science first documented the disorder in 1902, a number of terms have been used to describe the disorder presenting with symptoms of ADHD. ...read more.

Parents can feel, ostracised by their family and friends due to their child's behaviour, incompetent in parenting skills and inadequate. By primary/infant school, ADHD children frequently begin to exhibit learning disabilities. Hunt (1988) describes children having primary perceptual problems, evidenced by a tendency to reverse letters. Others have dyslexia, perhaps secondary to the impulsivity of their visual scanning. Learning disabilities may also manifest from impairment in other aspects of cognition. Hunt (1988) comments that attentional disturbance can impair discrimination between relevant and distracting stimuli and disrupt processes of sustained vigilance or reflection. By junior school ADHD children are usually enmeshed in conflict. Many children will drop out, skip classes, and get into trouble or be expelled. By this time children have often been diagnosed as having behavioural or learning disabilities (Hunt 1988). Many are now being treated with medication or through special educational environments. During adolescence the hormonal changes that take place, sometimes appear to increase cortical control and diminish overt hyperactivity. However for many teenagers with ADHD the symptoms remain and are subject to increases in potential aggression and danger, when unmodified by appropriate intervention ADHD is evident in continued learning disabilities and emotional-behavioural disturbance (Hunt and Cohen 1984). Teens with ADHD present differing challenges; academic and organisational demands increase, these impulsive youngsters face typical adolescent issues such as peer pressure, self-discovery, sexuality, drugs and alcohol, and the issue of independence (CHADD 2001). There is an increasing awareness that ADHD can extend from childhood, through adolescence and into adulthood. A study by Denckla et al (1976) demonstrated that between 31% and 66% of adults with a history of childhood ADHD continue with symptoms of the disorder. This means around 1-2% of adults fulfil the diagnostic criteria for ADHD. In fact current research reflects rates of roughly 2-4% among adults (CHADD 2001). In adulthood, roughly one third of individuals with ADHD lead fairly normal lives, while half still have symptoms that may interfere with their family relationships or job performance (Weiss et al 1985). ...read more.