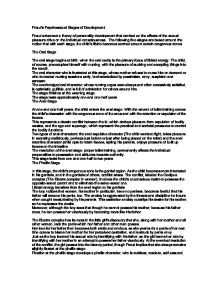 Freud's Psychosexual Stages of Development Freud advanced a theory of personality development that centred on the effects of the s****l pleasure drive on the individual consciousness. The following five stages are based around the notion that with each stage, the child's libido becomes centred around certain erogenous zones. The Oral Stage The oral stage begins at birth, when the oral cavity is the primary focus of libidal energy. The child, of course, preoccupies himself with nursing, with the pleasure of sucking and accepting things into the mouth. The oral character who is frustrated at this stage, whose mother refused to nurse him on demand or who truncated nursing sessions early, is characterized by pessimism, envy, suspicion and sarcasm. The overindulged oral character, whose nursing urges were always and often excessively satisfied, is optimistic, gullible, and is full of admiration for others around him. The stage finishes at the weaning stage. The stage lasts approximately one and one-half years. ...read more.

This stage lasts from one and one-half to two years. The Phallic Stage In this stage, the child's erogenous zone is the genital region. As the child becomes more interested in his genitals, and in the genitals of others, conflict arises. The conflict, labeled the Oedipus complex (The Electra complex in women), involves the child's unconscious desire to possess the opposite-sexed parent and to eliminate the same-sexed one. Libidal energy transfers from the a**l region to his genitals. The boy notices that women, his mother in particular, have no penises, becomes fearful that his father will remove his p***s, too. The anxiety is aggravated by the threats and discipline he incurs when caught masturbating by his parents. This castration anxiety outstrips his desire for his mother, so he represses the desire. Moreover, although the boy sees that though he cannot posses his mother, because his father does, he can posses her vicariously by becoming more like his father. ...read more.

Latency Period The resolution of the phallic stage leads to the latency period, which is not a psychosexual stage of development, but a period in which the s****l drive lies dormant. Freud saw latency as a period of unparalleled repression of s****l desires and erogenous impulses. During the latency period, children pour this repressed libidal energy into asexual pursuits such as school, athletics, and same-s*x friendships. But soon puberty strikes, and the genitals once again become a central focus of libidal energy. The Genital Stage In the genital stage, as the child's energy once again focuses on his genitals, interest turns to heterosexual relationships. The less energy the child has left invested in unresolved psychosexual developments, the greater his capacity will be to develop normal relationships with the opposite s*x. If, however, he remains fixated, particularly on the phallic stage, his development will be troubled as he struggles with further repression and defences. ...read more.

Though not a completely typically-structured essay, this is a very competent summary of the features of the psychosexual stages Freud proposed in his theory of infant to adult sexuality. The answer is clear and concise, and shows a good knowledge ...

Though not a completely typically-structured essay, this is a very competent summary of the features of the psychosexual stages Freud proposed in his theory of infant to adult sexuality. The answer is clear and concise, and shows a good knowledge of the types of personality that develop as a result of fixation as well as successfully completing certain stages. The answer is also very nicely set out with a clear structure that aids the reader in appreciating and retaining the information easily.

The Level of Analysis here isn't marked only AO1 (knowledge and understanding) is, so that will be evaluated here.

The knowledge shown is extensive, even for a summary, and so much so that some of the information seems like guesswork (the personality types in later life due to fixations); this isn't something that will hinder the candidate though, as it is made clear they know what they are talking about and possesses further knowledge behind what they show - this has just been trimmed for efficiency.

The candidate clearly demonstrates a critical understandings of the effects each psychosexual stage has on an individual and the psychology of each stage (erogenous foci, fixation), particularly the Phallic stage. Perhaps a bit more about the ideas of homosexuality starting in the phallic stage would enhance this answer, but given the other information in this section, it is by no means requisite.

The Quality of Written Communication is absolutely fine. Despite not accommodating longer, more elaborate sentences syntaxes as a result of not being a full-on essay, this candidate's QWC is still high and kept in good control.