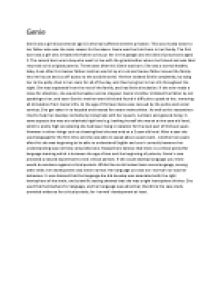 ﻿Genie Genie was a girl discovered at age 13 who had suffered extreme privation. This was mostly down to her father who was the main reason for the abuse. Genie was the third born in her family. The first born was a girl who irritated the father so he put her in the garage and she died of pneumonia aged 2. The second born was a boy who went to live with the grandmother where he thrived and was later returned to his original parents. Three years after this Genie was born. She was a normal healthy baby. ...read more.

If she ever made a noise for attention, she would be beaten and so stopped. Genie?s brother imitated the father by not speaking to her, and soon Genie?s mother went blind and found it difficult to speak to her, removing all stimulation from Genie?s life. At the age of thirteen Genie was rescued by the police and social services. She got taken in to hospital and treated for severe malnutrition. As well as this researchers tried to help her develop normally by trying help with her speech, numbers and general living. In some aspects she was at a relatively high level e.g. ...read more.

Researchers believe that there is a critical period for language learning which is between the age of two and the beginning of puberty. Genie?s case provided a natural experiment to test critical periods. If she could develop language use, there would be evidence against critical periods. Whilst Genie did indeed learn some language, among other skills, her development was never normal. Her language use was not ?normal? nor was her behaviour. It was claimed that the language she did develop was associated with the right hemisphere of the brain, and scientific testing showed that she was a right hemisphere thinker. She used that hemisphere for language, and her language was abnormal, therefore the case study provided evidence for critical periods, for ?normal? development at least. ...read more.