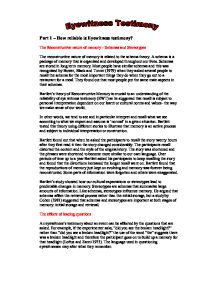 How reliable is Eyewitness testimony

Part 1 - How reliable is Eyewitness testimony? The Reconstructive nature of memory - Schemas and Stereotypes The reconstructive nature of memory is related to the schema theory. A schema is a package of memory that is organized and developed throughout our lives. Schemas are stored in long term memory. Most people have similar schemas and this was recognized by Bower, Black and Turner (1979) when they asked several people to recall the schema for the most important things they do when they go out to a restaurant for a meal. They found out that most people put the same main aspects in their schemas. Bartlett's theory of Reconstructive Memory is crucial to an understanding of the reliability of eye witness testimony (EWT) as he suggested that recall is subject to personal interpretation dependent on our learnt or cultural norms and values- the way we make sense of our world. In other words, we tend to see and in particular interpret and recall what we see according to what we expect and assume is 'normal' in a given situation. Bartlett tested this theory using different stories to illustrate that memory is an active process and subject to individual interpretation or construction. Bartlett found out that when he asked the participants to recall the story twenty hours after they first read it then the story changed considerably. ...read more.

The data is often incomplete and therefore recall is prone to be influenced by schemas and stereotypes. Under normal conditions, how do people recognize faces? Recognition can be unreliable partly because of the surprise element, nobody necessarily expects to witness a crime and also because of changes in context and appearance. In a brief glimpse, the face of a person is not the main focus of attention. Familiarity is a large part of face recognition. We are more likely to recognize somebody that we know rather than a total stranger. Bruce and Young (1986) have proposed a model for face recognition which suggests that there are two different mechanisms for familiar and unfamiliar face recognition. There is evidence from the study of brain-damaged patients to support this idea. It has been suggested that the recognition of unfamiliar faces involves feature detection, whereas familiar face recognition involves configural recognition. The effects of emotional factors of memory An eye witness will probably be in a high state of emotion at the time the crime is committed, and the psychological evidence suggests this may well influence their recall. Flashbulb memories are created at times of high emotion and many people claim that such memories are very accurate and there is some evidence to support this view. ...read more.

to try to identify who it was they thought they saw at the scene of the crime. The problem with this method of identification is that there is a large amount of pressure on the victim to pick one person who they think is responsible and this may cause him or her to make false accusations or recall the wrong things because the people in the identity parade all have similar features. Interview techniques The home office issued guidelines recommending that police interviews should proceed from free recall to general open ended questions, concluding with more specific closing questions. The basic cognitive interview was also formed after the consideration of the bullet points above, which basically reports on the time of the crime, where it happened, and anything else that they can think of surrounding the incident and then the information is fragmented and 'picked at' to find any vital clues or evidence. Conclusion There are implications from psychological research for improvements in the collection and use of eye witness testimony. Police might develop the basic cognitive interview by increasing contextual cues to enhance recall, minimising distractions and reducing eyewitness anxiety. Psychologists can be used as expert witnesses in criminal trials to advise jurors on the reliability of eyewitness testimony. ...read more.