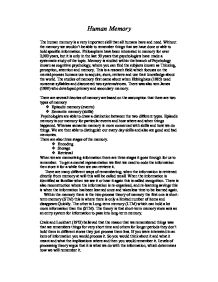 Human Memory The human memory is a very important skill that all humans have and need. Without the memory we wouldn't be able to remember things that we have done or able to hold specific information. Philosophers have been interested in memory for over 2,000 years, but it is only in the last 50 years that psychologists have made a systematic study of the topic. Memory is studied within the branch of Psychology known as cognitive psychology, where you can find the subjects known as Thinking, perception, attention and memory. This is a research field which focuses on the mental process humans use to acquire, store, retrieve and use their knowledge about the world. The studies of memory first came about when Ebbinghaus (1885) used nonsense syllables and discovered two systems/stores. There was also wm James (1890) who developed primary and secondary memory. There are several theories of memory are based on the assumption that there are two types of memory * Episodic memory (events) ...read more.

There is also reconstruction where the information is re-organised, and re-learning savings this is when the information has been learned once and takes less time to be learned again. Within the memory there is the two-process theory of memory the first one is short-term memory (STM) this is where there is only a limited number of items and disappears Quickly. The other is Long-term memory (LTM) which can hold a lot more information than the (STM). The theory is that short-term memory store acts as an entry system for information to pass into long-term memory. Craik and Lockhart (1973) believed that the reason that we remembered things was that we remembers things for very short time and others for longer periods they don't hold them in different stores they just process them less. If you were interested in an item of information you would process it. ...read more.

Information is not just plucked from the environment and stored away randomly. They say that it follows predictable patterns and is dependant on the contributions of rehearsal and short term memory. Another theory was the working memory model (Baddeley and Hitch 1974) they believe that the working memory acts on material we just perceive and allows us to manipulate this in short term memory. It allows us to keep a telephone number 'alive' in the memory long enough to dial it or allow us to perform tasks. According to Baddeley working memory is a short term memory system that allows us to retain and process information correctly. He regarded short term memory as having three components which allowed us to store temporarily verbal material. The component which stores verbal material was originally called articulatory loop it is now called phonological loop. The component that allows storage is called the visuospatial scratch card and the one that organises it all is the. Central executive. All these theories help us understand what memory is. And what the concept of memory is. ...read more.