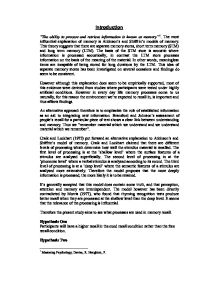 Introduction "The ability to process and retrieve information is known as memory"1. The most influential explanation of memory is Atkinson's and Shiffrin's models of memory. This theory suggests that there are separate memory stores, short term memory (STM) and long term memory (LTM). The basis of the STM store is acoustic where information is processed acoustically, in contrast the LTM store processes information on the basis of the meaning of the material. In other words, meaningless items are incapable of being stored for long durations by the LTM. This idea of separate memory stores has been investigated on several occasions and findings do seem to be consistent. However although this explanation does seem to be empirically supported, most of this evidence were derived from studies where participants were tested under highly artificial conditions. However in every day life memory processes come to us naturally, for this reason the environment we're expected to recall in, is important and thus affects findings. An alternative approach therefore is to emphasize the role of established information as an aid to integrating new information. ...read more.

It seems that the relevance of the processing is influential. Therefore the present study aims to see what processes are used in memory recall. Hypothesis One Participants will have a higher recall in the cued recall condition rather than the free recall condition. Hypothesis Two METHOD Design The study was a related design experiment, with two conditions testing one independent variable. The participants were required to complete both conditions of the experiment; these conditions were free recall and cued recall of the words. Participants In total there were 12 participants, all of which were psychology students in their first year of their degree. The sample of participants consisted of a mixture of both sexes and all were eighteen plus. The sample was an 'opportunity sample' in which they were the only available participants that were willing to take part. Apparatus and Materials * Participant Response Sheets: These consisted of a list of words that the participant was required to recall in the immediate and cued recall conditions. In addition they were also required to rate the difficulty of the tasks and how surprised they were. ...read more.

(See appendix for a copy of response sheet two) 4. The researcher then, as discretely as possible, prepared response sheet three. This consisted of a list of words that the participant had failed to recall, in which it contained a balanced number of the M words and R words, which the participant had associated with the original list provided. 5. Once response sheet three was prepared the participant was again required to recall the original list of words but this time the researcher had given them a list of cues to help them recall the words. 6. When the participant had completed the cued recall or was unable to recall any further words, the researcher collected their response sheet and thanked them for their time in participating and debriefed them on the purpose of the experiment. 7. The results were then analysed by using a related t test. Ethics Ethically the study is good as no participants are being harmed or deceived during the course of the study. Furthermore participant data was also kept anonymous. RESULTS Surprise 3,4,5 First Recall Cued Recall n 12 12 Mean diff 0.500 1.750 SD of diff 3.451 1.815 t 0.502 3.339 P(2tld) 0.626 0.007 1 Mastering Psychology, Davies, R. Houghton, P. ?? ?? ?? ?? ...read more.