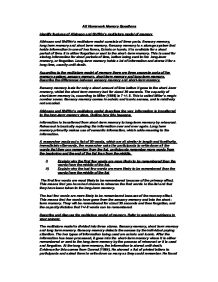 Identify features of Atkinson and Shiffrin's multistore model of memory.

Baddeley (1966), gave us evidence to show that LTM is best stored semantically. When asked to remember ten distinct words, and then ten with similar meanings, he found that after a long delay, participants recalled the more distinctive words, thus proving that LTM best gets information from semantic processes. These two experiments show us that there are three clear stages to memory. However this model is far too simplistic to explain the whole memory system. There is a lot more evidence for LTM and STM. One such example is people with brain damage, such as Clive Wearing, whose brain was damaged by a viral infection. Wearing was unable to retain new memories. This shows that a part of his memory was damaged, and LTM cannot take place due to the damage. This is in support of Atkinson and Shiffrin's multistore model. This model is too simplistic, and furthered by Baddeley and Hitch (1974). They cast doubts on Atkinson and Shiffrin's theory, and belief that STM divided into four sections, rather than just one. ...read more.