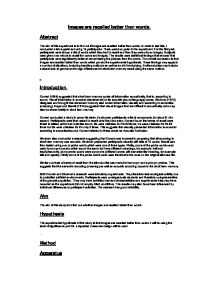 Images are recalled better than words

Images are recalled better than words. Abstract The aim of this experiment is to find out if images are recalled better than words. In order to test this, I conducted a lab experiment using 15 participants. There were two parts to the experiment. For the first part, participants were shown a list of words which they had to recall and then they were shown images. Subjects were given one minute to recall the words and images. The results were statistical findings that showed that participants were significantly better at remembering the pictures than the words. The overall conclusion is that images are recalled better than words which proves the experimental hypothesis. These findings may apply to a number of situations, including teaching methods as well as an aid for studying. Further studies may include a closer look at gender and/or age differences for short-term memory recall using the same method. Introduction. Conrad (1964) suggested that short-term memory codes all information acoustically, that is, according to sound. Visual information is encoded (transformed) to its acoustic (sound/language) codes. Shulman (1970) disagreed and thought that short-term memory also coded information visually and according to semantics (meaning). Heyer and Barrett (1974) suggested that visual images that are difficult to acoustically code may also be stored briefly in short term memory. Conrad conducted a study to prove his claim. he showed participants a list of consonants, for about 3/4 of a second. ...read more.

therefore this would be the best method to use for my research. however there disadvantages of conducting lab experiments. firstly The experiment is not typical of real life situations. Most experiments are conducted in laboratories - strange and contrived environments in which people are asked to perform unusual or even bizarre tasks. The artificiality of the lab, together with the 'unnatural' things that the subjects may be asked to do, jointly produces a distortion of behaviour. Therefore it should be difficult to generalise findings from experiments because they are not ecologically valid. Also Behaviour in the laboratory is very narrow in its range. By controlling the situation so precisely, behaviour may be very limited. A major difficulty with the experimental method is demand characteristics. Some of the many confounding variables in a psychology experiment stem from the fact that a psychology experiment is a social situation in which neither the Subjects or the Experimenters are passive, inanimate objects but are active, thinking human beings. Imagine you've been asked to take part in a psychology experiment. Even if you didn't study psychology, you would be trying to work out what the experimenter expected to find out. Experimenters too have expectations about what their results are likely to be. Demand characteristics are all the cues which convey to the participant the purpose of the experiment. using undergraduate students would therefore be unrepresentative of the general population. ...read more.

10 2 80 100 -20 20 -5 70 100 -30 30 -7.5 90 100 -10 10 -2 80 100 -20 20 -5 90 100 -10 10 -2 90 100 -10 10 -2 Sum of positive ranks = 13.5 Sum of negative ranks = 33.5 Discussion The results of this study supported the hypothesis in that images are recalled well than words. Fewer participants recalled words whereas recall of images was higher. Jacob (1887) suggested that short-term memory has a limited capacity of about 5 to 9 items this might be why participants could remember the images or words shown. Baddeley (1966) suggested that visual, acoustic and semantic all are ways of encoding things in your memory. This could suggest that participants in the study might have related the visual information with a meaning in order to recall the better. Pictures access semantic meaning more quickly and completely than words. Most of the participants were female this might have lead to biased results. If this experiment was to be done again than half of the participants should be female and the other half male. Scientifically women recall emotional events far better than men. Perhaps during the experiment participants might have related some of the images to emotional events in their life. According to the common code theory pictures and words both require analogous processing before accessing semantic information. It suggests that pictures require less time than words for accessing the common conceptual system. Overall the experiment suggests that images are recalled well than words. ...read more.