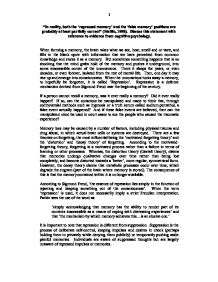 &quot;In reality, both the 'repressed memory' and the 'false memory' positions are probably at least partially correct&quot; (Matlin, 1998). Discuss this statement with reference to evidence from cognitive psychology.

"In reality, both the 'repressed memory' and the 'false memory' positions are probably at least partially correct" (Matlin, 1998). Discuss this statement with reference to evidence from cognitive psychology. When forming a memory, the brain takes what we see, hear, smell and or taste, and fills in the blank spots with information that we have perceived from common knowledge and stores it as a memory. But sometimes something happens that is so shocking that the mind grabs hold of the memory and pushes it underground, into some inaccessible corner of the unconscious. There it sleeps for years, or even decades, or even forever, isolated from the rest of mental life. Then, one day it may rise up and emerge into consciousness. When the unconscious tucks away a memory, to hopefully be forgotten, it is called 'Repression'. Repression is a defence mechanism derived from Sigmund Freud near the beginning of the century. If a person cannot recall a memory, was it ever really a memory? Did it ever really happen? If so, can the conscious be manipulated and made to think that, through controversial methods such as hypnosis or a truth serum called sodium pentathol, a false event actually happened? And if these false events are believed, then can the manipulated mind be used in court cases to sue the people who caused the traumatic experience? ...read more.

A survey of 810 chartered psychologists indicated that 90 per cent believed recovered memories to be sometimes or 'essentially' correct, a very small percentage believed that they are always correct. In addition, 66 per cent believed that they are possible, and 14 per cent believed that one of their own clients has experienced false memories (British Psychological Society, 1995). Those who believe in repressed memories of childhood dramatic events cite evidence such as that of Williams (1994). (Please refer to Appendix 1.). There has been a fierce and bitter controversy between those who believe that these recovered memories are genuine and those who argue that such memories are false. The 'False Memory Syndrome' has no well-established scientific recognition and is not a recognised medical condition. The idea of such a 'disorder' was developed by the False Memory Syndrome Foundation in 1992. It was established to provide emotional support for accused parents themselves. It has been said that therapists believe everything their clients say, without checking with outside sources to see if the information was correct. The False Memory Syndrome Foundation emphasises that this practice is immoral, because the therapist is working to develop memories of events, not even knowing if the memories are true. This may lead to false accusations and stress in the family. ...read more.

Williams (1994, p.1174) concluded as follows: 'If, as these findings suggest, having no recall of s****l abuse is a fairly common event, later recovery of memories of s****l abuse by some women should not be surprising.' In fact 16% of those women who recalled being abused said that there had been periods of time in the past when they could remember the abuse. There was one finding that did not fit the Freud's repression hypothesis: he would have expected those women who suffered the most severe abuse to show the worst recall, but the opposite is what was actually found. Appendix 2. Ceci (1995) asked preschool children to think about a range of real and fictitious but plausible events over a 10-week period. The children found it hard to distinguish between the real and fictitious events, with 58% of them providing detailed stories of fictitious events that they falsely believed had occurred. Psychologists who were experienced in interviewing children watched videotapes of the stories, and could not tell which events were real and which were false. Appendix 3. Hyman, Husband and Billing (1995) were able to induce about 25% of their undergraduate participants to falsely 'recall' different childhood events: being hospitalised for an ear infection, having a fifth birthday party with a pizza and a clown, spilling punch at a wedding reception, being in the grocery store when sprinklers went off, and being left in a parked car, releasing the parking brake and having the car role into something. ...read more.