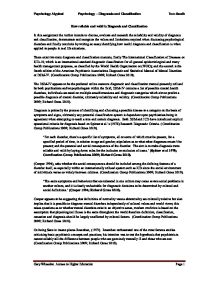 In this assignment the Author intends to discuss, evaluate and research the reliability and validity of diagnosis and classification, demonstrate and recognise the values and limitations required when discussing psychological disorders and finally conclud

How reliable and valid is Diagnosis and Classification In this assignment the Author intends to discuss, evaluate and research the reliability and validity of diagnosis and classification, demonstrate and recognise the values and limitations required when discussing psychological disorders and finally conclude by writing an essay identifying how useful diagnosis and classification is when applied to people in real life situations. There exist two main diagnosis and classification manuals, firstly The International Classification of Diseases or ICD-10, which is an international standard diagnostic classification for all general epidemiological and many health management purposes, as classified by the World Health Organization or (WHO); and the second is the fourth edition of the American Psychiatric Associations Diagnostic and Statistical Manual of Mental Disorders or DSM-IV. (Coordination Group Publications 2009; Richard Gross 2010). The DSM-IV appears to be the preferred online resource diagnostic and classification manual presently utilised by both psychiatrists and/or psychologists within the field; DSM-IV contains a list of possible mental health disorders, individuals are rated on multiple axes/dimensions and diagnostic categories which aim to predict a possible diagnosis of mental disorder, ultimately reliability and validity. (Coordination Group Publications 2009; Richard Gross 2010). Diagnosis is primarily the process of identifying and allocating a possible disease to a category on the basis of symptoms and signs, ultimately any potential classification system is dependent upon psychiatrists being in agreement when attempting to reach a true and certain diagnosis. Both DSM and ICD have introduced explicit operational criteria for diagnosis based on Spitzer et al.'s (1978) Research Diagnostic Criteria. (Coordination Group Publications 2009; Richard Gross 2010). ...read more.

(Claridge and Davis 2003; Richard Gross, 2010). Reference List: Coordination Group Publications 2009 AS & A2 Psychology Exam Board AQA A Richard Gross 2010 Sixth Edition Psychology: The Science of Mind and Behaviour Rosenhal D. L. 1973 http://www.holah.karoo.net/rosenhalstudy.htm On being sane in insane places accessed on the 16th March 2011 Bibliography: Richard Gross 1996 Third Edition Psychology: The Science of Mind and Behaviour Case Studies - How useful are diagnosis and classification when applied to people in real life situations? Introduction In this assignment the author will look at three independent and isolated case studies, attempt to ascertain how useful diagnosis and classification is when applied in real life situations; the author will diagnose their present psychological mental condition, justify that diagnosis and design appropriate treatment. Diagnosis of Case Study One Leane is a 29 year old woman, married with four children, she appears to be suffering from a major depressive disorder as there is long term stress and anxiety in her daily life which has become extremely complex; her symptoms appear to have degenerated to the extent that her thoughts and behaviour are now becoming delusional and neurotic. Her behaviour appears to be leaning towards a compulsive, obsessive disorder or OCD. (DSM-IV 1999 - 2003; Richard Gross 2010). During the past three months Leanne has become increasingly unhappy with frequently recurring suicidal thoughts and behaviour that can only be described as being both delusional and neurotic, her daily routine has become marred by her increasingly intrusive and repetitive thought processes of potentially imminent danger to loved ones coupled with obsessive compulsion disorders. ...read more.

Psychologists argue that the implications of labelling for real patients can have the effect of creating a process known as the self-fulfilling prophecy, the patient begins to see him/herself in terms of the label applied and behave in ways associated with it, thus, the behaviour is perpetuated. The process of diagnosis has a significant effect on the patient which is difficult to remove or more significantly, it encourages others to view the patient as mentally ill which affects how he/she is subsequently treated, both medically and socially. Behaviour is seen in light of the label, which could arguably lead to prolonged illness and social problems because of the stigma attached to a mental disorder. (DSM-IV 1999 - 2003; Coordination Group Publications 2009; Richard Gross 2010). If labelling is to be credited as an accurate theory then it highlights the importance of the label in diagnosis, and the problems attached to having a stigma. It is therefore of the most utmost importance that a diagnosis should be accurate, in both identification and treatment, thus highlighting the importance of the accuracy of the classification system; therefore the diagnosis and classification system is an essential diagnostic tool when being applied to people in real life situations. It is important to provide a starting point, a common language and standard criteria for the classification of mental disorders. (DSM-IV 1999 - 2003; Coordination Group Publications 2009; Richard Gross 2010). Reference List: DSM-IV 1999 - 2003 http://allpsych.com/disorders accessed at 01:01 hrs on the 12th March 2011 Coordination Group Publications 2009 AS & A2 Psychology Exam Board AQA A Richard Gross 2010 Psychology: The Science of Mind and Behaviour Sixth Edition ?? ?? ?? ?? Psychology Atypical Psychology - Diagnosis and Classification Tom Seath Gary Wheadon. Access to Higher Education Page 1 ...read more.