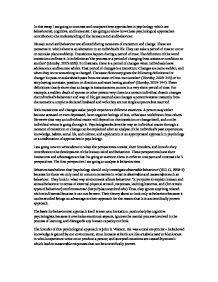 In this essay I am going to contrast and compare three approaches in psychology which are behaviourist, cognitive, and humanist. I am going to show how these psychological approaches contribute to the understanding of the human mind and behaviour.

In this essay I am going to contrast and compare three approaches in psychology which are behaviourist, cognitive, and humanist. I am going to show how these psychological approaches contribute to the understanding of the human mind and behaviour. Human mind and behaviour are affected during moments of transition and change. These are moments in which there is an alteration in an individual's life. They can take a period of time to occur or can take place suddenly. Transitions happen during a period of time. The definition of the word transition confirms it. It is definite as 'the process or a period of changing from a state or condition to another' (Hornby, 2005: 1631). To illustrate, there is a period of changes when individuals leave adolescence and become adults. That period of changes is a transition. Changes are more sudden, and when they occur something is changed. The same dictionary gives the following definitions for change: 'to pass or make sb/sth pass from one state or form into another' (Hornby, 2005: 243) or 'to stop having one state, position or direction and start having another' (Hornby, 2005: 244). These definitions clearly show that a change is instantaneous, occurs in a very short period of time. For example, a sudden death of spouse or other person very close to a certain individual drastic changes the individual's behaviour and way of life; get married also changes a person's status instantly from the moment a couple is declared husband and wife they are not single anymore but married. ...read more.

Students believe in their teachers as a person whom knows more than them, so they take it into account and learn from them by repeating what they do linked to what they teach. The behaviourist approach has been very useful at the education sector, psychotherapy, and rehabilitation of offenders, and all theories are always scientific proven. Nevertheless, its limitations have to be taken into account as well which have been mentioned above, the use of animals to explain human behaviour, the ignorance on the human ability to think, and the comparison of human with machines. Cognitivism is another approach to psychology. The origin of the word cognitive - from the Latin 'cognitid' - means 'to know' or 'to understand'. A dictionary defines the word cognitive as 'connected with mental processes of understanding'. (Hornby, 1948: 288) This perspective is directly linked with the internal mental processes of thought such as memory, problem-solving, thinking, and language. The cognitive psychological perspective is seen as a response to behaviourism because cognitive psychologists see humans as rational beings not as programmed animals with no ability to think. The study of the mental processes is not observable which contrasts with the behaviourist idea to study only observable thinks. This perspective became established in the late 1950's and early 1960's. Jerome Bruner contributed to the advance of the cognitive approach to psychology but there is no certain information about the founder of this approach. ...read more.

In my opinion counselling is the best form to support someone through transition and change because a person going through it generally have the tendency to loss the good of them but counselling helps the person to have a positive self-image and contribute to a healthy self-esteem. However, for those very disturbed mentally cognitive behavioural therapies are more practical because therapists help the client to think in a clear way, which is difficult to the client because of mental disturbs that unable clear think. Basically in this essay I gave a brief overall of behaviourist, cognitive, and humanist approaches to psychology. They are all different, some of them were created to show dissatisfaction of other perspectives but I personally think that a combination of certain perspectives is what best support someone going through transition and change. Humanism is very good in the way that empowers the client to set what is best for them but that perspective does not enable those that are not able to guide them or that simply prefer to have guidance from others to set a 'list' of what is good or bad for them. Thus, a combination of humanism and cognitivism would be brilliant because cognitivism has that part that humanism does not have - to change the mind of 'weak' clients. That's because cognitive psychologists are able to persuade the patient in order to make them have more rational and real beliefs. ...read more.

The writer has given a good account of three psychological perspectives. It is clear that the writer has an understanding of these approaches and has written the essay in their own words. With some improvement to the introduction, better referencing and taking the comments made on board, this essay could receive full marks.