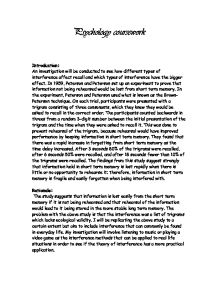 Investigation to see which of the two interference methods, playing video games or listening to music, has more of an effect on recall.

Psychology coursework Introduction: An investigation will be conducted to see how different types of interference affect recall and which types of interference have the bigger effect. In 1959, Peterson and Peterson set up an experiment to prove that information not being rehearsed would be lost from short term memory. In the experiment, Peterson and Peterson used what is known as the Brown-Peterson technique. On each trial, participants were presented with a trigram consisting of three consonants, which they knew they would be asked to recall in the correct order. The participants counted backwards in threes from a random 3-digit number between the initial presentation of the trigram and the time when they were asked to recall it. This was done to prevent rehearsal of the trigram, because rehearsal would have improved performance by keeping information in short term memory. They found that there was a rapid increase in forgetting from short term memory as the time delay increased. After 3 seconds 80% of the trigrams were recalled, after 6 seconds 50% were recalled, and after 18 seconds fewer than 10% of the trigrams were recalled. The findings from this study suggest strongly that information held in short term memory is lost rapidly when there is little or no opportunity to rehearse it; therefore, information in short term memory is fragile and easily forgotten when being interfered with. Rationale: The study suggests that information is lost easily from the short term memory if it is not being rehearsed and that rehearsal of the information would lead to it being stored in the more stable long term memory. ...read more.

This may be due to the fact that playing video games requires active participation and more concentration than listening to music which is why the results have turned out as they have. These findings do back up Peterson and Peterson's study as they too found that recall was affected by the interference (counting backwards in threes) and that information is lost easily from short term memory if not rehearsed. Generalisability - the study does not allow for a full generalisation about the population to be made simply because the sample is too small and since the participants were selected at random, there is no possibility of generalising about a particular section of the population. However it is unlikely that significantly different results would be achieved if the rest of the population was sampled as memory is a feature everyone possess apart from those who have suffered from brain damage; therefore, on average, it would be expected that the results would be similar. The use of stratified sampling would have enabled generalisations to be made about particular sections of the population. Applications to everyday life - an application of this study could be when someone is trying to memorise a passage of script for a drama performance; whilst trying to rehearse it, he/she could be distracted by other things going on such as noise from other members of the cast or by something else. This would lead to lower recall as he/she had her rehearsal interfered with when trying to memorise the script. ...read more.