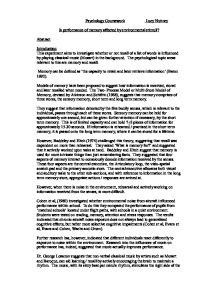 Is performance of memory affected by environmental stimuli?

Psychology Coursework Lucy Nuttney Is performance of memory affected by environmental stimuli? Abstract Introduction This experiment aims to investigate whether or not recall of a list of words is influenced by playing classical music (Mozart) in the background. The psychological topic areas relevant to this are memory and recall. Memory can be defined as 'the capacity to retain and later retrieve information' (Baron 1992). Models of memory have been proposed to suggest how information is received, stored and later recalled when needed. The Two- Process Model or Multi-Store Model of Memory, devised by Atkinson and Schifrin (1968), suggests that memory comprises of three stores, the sensory memory, short term and long term memory. They suggest that information detected by the five bodily senses, which is relevant to the individual, passes through each of these stores. Sensory memory can be held for approximately one second, but can be given further attention if necessary, by the short term memory. This is of limited capacity and can hold 7+2 pieces of information for approximately 15-30 seconds. If information is rehearsed / practised in the short term memory, it is passed onto the long term memory, where it can be stored for a lifetime. However, Baddeley and Hitch (1974) challenged this theory, suggesting that recall was dependent on more than rehearsal. They asked 'What is memory for?' and suggested that it actively worked upon tasks at hand. Baddeley and Hitch suggest that memory is used for more intricate things than just remembering facts. They suggested that four aspects of memory interact to consciously decode information received by the senses. These four aspects are the central executive, the Articulatory loop, the visio-spatial scratch pad and the primary acoustic store. The central executive allocates both visual and auditory tasks to the other sub-sections, and with reference to information in the long term memory store, appropriate actions / responses are arrived at. ...read more.

They were told that no names would be recorded and that confidentiality was assured of their result. Another risk would be if people then realised the experiment tested memory they could think it was to do with intelligence and worry that they would be judged as stupid' if they did not remember many words. This could cause psychological distress to that person and might confirm personal fears of insecurity causing further damage. This could be controlled by warning the participant what the study was going to be about before they did it so if they felt embarrassed or worried about their result they could make a more informed decision not to take part. Results This table shows how many words were recalled by each participant. It shows that the mean average number of words recalled in Condition A was 15.08; 1.59 less than condition B at 16.67. It also allows us to see that 2/3 of the participants recalled more words with classical music playing than they did in silence. Summary table to show the number of words recalled by each participant in condition A and Condition B This bar chart shows condition A results in red and condition B in green. From this we can see that both the highest and lowest numbers of words recalled were in condition B. This bar chart clearly demonstrates the difference between condition A and B to vary greatly throughout the experiment. This pie chart shows the difference between the average scores to be quite insignificant as there is only a 5 % difference which means that although most of the numbers of words recalled did increase from condition a to condition b there was not a big difference when taking into account what their scores actually were and working out the average. I also deduced the range to be 12 for condition A, the lowest/ highest values being 8 and 20, and 17 for condition B, the lowest/ highest values being 7 and 24. ...read more.

The participants were also talked through the experiment as we carried it out and everything was plainly stated to them. A better way of presentation of the words however, might have been to present them on an over head projector, so that timing could be controlled better; in our experiment, participants were in control of turning over the sheet of paper with the list on and therefore could have turned it over before the test started. The paper was only one sheet thick as well so participants might have been able to see the words even when the sheet was face down. To expand the experiment further, there are many different variables and different aspects of memory which I could test. The serial position effect, mentioned in my introduction, would be an interesting aspect of memory to test as I noticed in the lists of words there were a significant number of words from the start and the end of the actual list, included in the words the participants remembered. We could test this by setting a quota at, say, the first five and last five words and seeing what percentage of the recalled words were within one of these quotas. We could have used a recording of background noise to repeat Cohen's experiment or used music with words to test the participants. A really interesting experiment would be to use children against adults in a memory test with the classical music, as I believe children would give a more positive result in relation to my hypothesis. I don't believe that there would be a significant difference between males and females, if any, but it would be worth considering. We could have tested different amounts of words see if there is a difference in capacity of recall between a list of one hundred words and thirty words; would the participants be put off by the amount of words and not remember as many for the long list as the short? There are clearly many different experiments relating to memory that could be tested. ...read more.