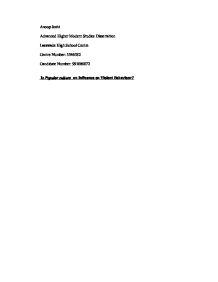 Is Popular culture an Influence on Violent Behaviour?

'The point is, rock stars have tremendous influence on impressionable young people. Indeed, advertisers spend billions of dollars in the belief that images and music can influence a person's behaviour and the choices he or she will make.' Muhlenburg's attack on the industry here is based on a completely valid argument over marketing and the way certain products are marketed at an underage market. In a recent Federal Trade Commission report (see appendix e) they discovered that 80% of R-rated (over 18) movies were targeted at children of the age of 17 and under. Muhlenburg brings his readers to harsh reality and that is that music can affect people, subconsciously or otherwise. Music is the perfect form in which art can be spread, but it is also a medium with which, as has been seen, subversive messages can lurk which have the ability to manipulate people's actions causing, in some cases violent behaviour - including self-harm. This is comprehensible evidence of popular culture influencing violent behaviour in contemporary democracy. The Long-Term Effects of Popular culture Most criticisms of popular cultures such as television and film regard the short-term effects of over exposure to violent imagery. However, studies have been conducted regarding the long-term effects of violence on television and in films and the effects they can have on individuals over a long period of time. An initial longitudinal study was conducted by Lefkowitz in 1972. He and his colleagues were able to demonstrate long-term effects in a group of children followed up over a ten-year period. Confirming studies previously demonstrated in 1963 by Eron in the relationship between preference for violent media and the aggressive behaviour of children aged eight. The only question was whether this relationship would hold a grip at later ages in a child's life. To answer this question the investigators obtained peer-rated measures of aggressive behaviour and preferences for various kinds of television, radio and comic books when the children were eight years old. ...read more.

More than just what such individuals watch has to be taken into consideration, but also who they are and where they have come from. If it was simply that violence on the screen instigated violent behaviour and nothing more, what of other cases such as Mary Bell, a girl who killed two very young children. She had not seen 'Child's Play' or 'Natural Born Killers', but had experienced real life abuse at the hands of her mother. It takes more than just watching violence on the screen to cause it. An individual may watch a violent film and then perform the acts in real life, but one would then have to look at what they, as a reader, originally brought to the reading. Thus, when asked the question, 'Is popular culture an influence on violent behaviour' my answer is no. After my extensive research I am led to believe that violent behaviour is intrinsically based on many factors, interdependent on one another and that popular culture cannot solely influence an individual to commit an act of violence. However, I do agree with the fact that images in popular culture can influence the way in which an individual carries out an act of violence. This is because of a lack of other stimuli which a violent individual can act upon, retorting upon something they have seen before in a movie or on television. This however, does not gratify a link between violence and popular culture in that popular culture does not have a direct control over an individual, Reverend J. Williamson of Littleton Colorado, when talking about the murders in Columbine said: '...And through the soul, although they shape our behaviour, the roots of violence are much more complicated than just bad rock lyrics or brutal screenplays. Violence lives amongst us, in our homes and on our streets and it is these aspects of life we need to help eradicate before we can stop a repeat of this [ Columbine ] happening. ...read more.