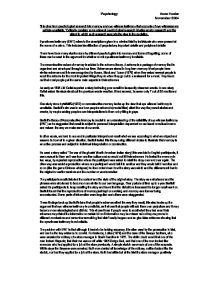 'It is clear from psychological research into memory and eye-witness testimony that accounts of eye-witnesses are entirely unreliable.' Critically consider some relevant psychological research (studies and/or research) and the extent to which such research supports the view in the quotation. Eyewitness testimony (EWT) refers to the descriptions given in a criminal trial by individuals who were present at the scene of a crime. This includes identification of perpetrators, important details and peripheral details There have been many studies done by different psychologists into memory and forms of forgetting; some of these can be used in the argument for whether or not eyewitness testimony is reliable. The reconstructive nature of memory is related to the schema theory. A schema is a package of memory that is organized and developed throughout our lives. Schemas are stored in long term memory. Most people have similar schemas and this was recognized by Bower, Black and Turner (1979) when they asked several people to recall the schema for the most important things they do when they go out to a restaurant for a meal. They found out that most people put the same main aspects in their schemas. As early as 1895 J.M Cattel reported a study indicating poor recall for frequently observed events. In one study Cattel asked his students about the previous weeks weather. ...read more.

These findings back up Bartlett's idea that people's schemas affect the way they recall, this also backs up the argument that eye witness testimony is unreliable, as it shows that people will add there own prejudices and it may become more stereotypical and clich�d. This shows those if people were to recall what they had seen their schemas may distort the information or certain bit s of information may be missed out or they may come to different conclusions and remember something that didn't really happen and so give false evidence showing that the eyewitness testimony is not reliable. The problem with EWT is that although it tends to be lacking accuracy, it is often used by the prosecution in trial, and can be the key evidence to convict. For instance, Loftus (1979) and the case of the Sawyer brothers, who were arrested for robbery of a store manager in South Carolina in 1975. The victim could recall that one of the men looked Hispanic, that their car was an off white 1965 Dodge Dart, and that one of the men looked like someone who had applied for a job at the store previously. A simple sketch was made of one of the suspects. Within days the Sawyers were arrested. Both men denied all knowledge of the robbery, neither looked like the sketch, nor had they applied for a job at the store. ...read more.

impact on them they would be able to recall it very accurately as they would have a flash bulb memory of it and so would make eye witness testimonies very accurate. From my research into psychological studies and theories, it is reasonable for me to say that eye-witness testimony is unreliable and shouldn't be used as the number one source of evidence in court. EWT is all based on perception, and every individual's perception of things will differ, this could be on account of age, mood at the time, experience with this situation and on how reliable their memory actually is, therefore should only be used as backup, not key evidence. There have been studies into improving EWT. Geiselman (1985) believed that there should be some changes made to understand and make eyewitness testimony more reliable, and that people should take into account some of the basic characteristics of human memory. * Memory traces are complex, and contain various features and/or kinds of information. * The effectiveness of retrieval cue depends upon the extent to which the information it contains overlaps with the information stored in the memory trace, this is the encoding specificity principal. * Various retrieval cues may permit access to any given memory trace, for example, if the name of an acquaintance cannot be retrieved, it may be recalled if the other information is used as a retrieval cue. Psychology Anna Hunter November 2004 ...read more.