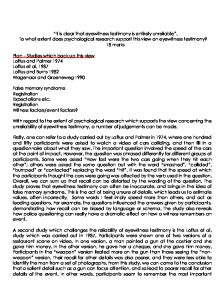 "It is clear that eyewitness testimony is entirely unreliable". To what extent does psychological research support this view on eyewitness testimony? 18 marks Plan - Studies which back up this view Loftus and Palmer 1974 Loftus et al. 1987 Loftus and Burns 1982 Wagenaar and Groeneweg 1990 False memory syndrome Registration Expectations etc. Registration Witness factors/event factors? With regard to the extent of psychological research which supports the view concerning the unreliability of eyewitness testimony, a number of judgements can be made. Firstly, one can refer to a study carried out by Loftus and Palmer in 1974, where one hundred and fifty participants were asked to watch a video of cars colliding, and then fill in a questionnaire about what they saw. The important question involved the speed of the cars at the point of impact. However, the question was phrased differently for different groups of participants. Some were asked "How fast were the two cars going when they hit each other"; others were asked the same question but with the word "smashed", "collided", "bumped" or "contacted" replacing the word "hit". ...read more.

Their recall for other details was also poorer, and they were less able to identify the man from a set of photographs. From this study, we can come to the conclusion that a salient detail such as a gun can focus attention, and so lead to poorer recall for other details of the event. In other words, participants seem to remember the most important details the most, and will focus all their attention on salient details like the gun (weapon focus), and miss out on other significant details of the situation. A third study one can take into consideration is the Loftus and Burns study, which was carried out in 1982 and portrays evidence that the violence of an event can also affect recall. Participants were shown one of two versions of a simulated armed robbery on video. One version included a scene of a boy being shot in the face while the robbers were making their getaway. The recall of detail of the event was much higher for participants who had seen the "non-violent" version had less accurate and less complete recall, not only for event immediately before the shooting, but also for events up to two minutes earlier. ...read more.

However, this might only be partial. As with the influence of exposure time on memory, this too was demonstrated by Ebbinghaus (1885). It has also been shown in a naturalistic study of long term forgetting, carried out by Wagenaar and Groeneweg in1990. Seventy-eight survivors of the concentration camp, Camp Erika, were interviewed between 1984 and 1987 about their camp experiences. The information they gave was compared with earlier evidence they had given just after the end of the war. There was general agreement in the later interviews on basic information. All but three of the thirty-eight people who had been tortured by the camp commandant, for example, remembered his name. However, much of the detail had been lost. In conclusion, while basic information may be well remembered over time, details tend to be forgotten. On the whole, storage factors can affect recall. Basic information is often retained, but detailed information is lost over time. Memory can be supplemented by later information. It can be distorted by misleading information, known as the misinformation effect. This can also lead to completely inaccurate information being given. The misinformation effect has been challenged in terms of whether it is the result of memory impairment of the effects of bias in the testing situation. ...read more.