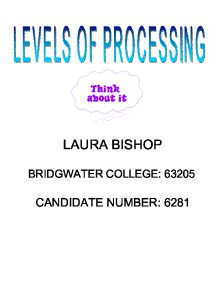 LAURA BISHOP BRIDGWATER COLLEGE: 63205 CANDIDATE NUMBER: 6281 Contents Page PAGE 1 Abstract PAGE 2-3 Introduction PAGE 4 Aim and Hypothesis PAGE 5-6 Method PAGE 7-8 Results PAGE 9-11 Discussion PAGE 12 References and Bibliography PAGE 13 Appendix 1, Introduction Script PAGE 14 Appendix 2, Debrief PAGE 15 Appendix 3, Visual Word List Questionnaire (condition 1) PAGE 16 Appendix 4, Semantic Word List Questionnaire (cond 2) PAGE 17 Appendix 5, Questionnaire participant Answer sheet PAGE 18 Appendix 6, Participants recall of words PAGE 19 Appendix 7, Inferential Statistics (mathematical calculations) Abstract The aim was to find out the effects of levels of processing on recall. The investigation is based on Craik and Lockhart's theory regarding visual processing which is the shallowest and semantic which is the deepest level. A one tailed (directional) hypothesis was used stating that there would be a significant increase in the number of words recalled in the semantic condition compared to the visual condition. The method was experimental and the independent groups design was used. There were two conditions: visual processing vs. semantic processing. Each condition had ten participants, a mixture of females and males aged 16 to 17. Word lists were used to test recall and general consent was gained. The findings showed that there was a significant increase in the amount of words recalled in the semantic condition compared to the visual condition. The mean for Condition 1 (visual) was 2.6, the mean for condition 2 (semantic) was 5.6. The Mann Whitney test showed the results to be statistically significant to the 0.05 level. The observed value of U (8) was less than the critical value (27) so the null hypothesis was rejected. Semantic processing led to increased recall, suggesting that thinking about the meaning of a word helps you to remember it, so therefore it must be the deepest level of processing. Introduction The experiment will be based on Levels of Processing. ...read more.

These were then collected in. The participants were then debriefed see appendix 2. Controls There were two conditions involved in the experiment (visual and semantic). The questionnaires were alternatively assigned to the group. Everybody was given the same amount of information about the experiment and treated in exactly the same way i.e. participants were given the same amount of time to do the task and the same amount of time to recall the words. The results for the experiment were all obtained in the same hour so the time factor could not affect the results (memory may be better at different times of the day). The participants were asked to remain silent during the experiment so they could not discuss or confer. Results Descriptive Statistics Summary Table showing the Mean, median, Mode and Range Mean Median Mode Range Visual condition 1 2.6 2 1 4 Semantic condition 2 5.6 5 5 3 The table shows that the mean number of words recalled in each condition out of a possible 10 words. There is a higher mean number of words recalled in the semantic condition (5.6) compared to the visual condition (2.6), the mean for condition two is over two times higher than condition 2 suggesting that the semantic condition led to the deepest level of processing. The median is much higher in condition two compared to condition one confirming that recall is much better for semantic rather than visual learning. The mode shows the most common number of words recalled in the conditions, this is much higher in the semantic condition showing a higher most common recall (of 5 words) compared to the visual condition where the most common number of words recalled was 1. The range shows the spread/distribution of the scores. The range is lower in the semantic condition, showing that the scores were closer together (more dense) whereas the visual scores are more spread out and less consistent. ...read more.

By getting children to think about the meaning of words rather than just their appearance should help them to understand and remember the word. Using this level of processing in teaching will increase the likelihood of what's being taught to enter the children's long term memory rather than their short term memory and then being displaced. It could also be used for spelling test expansion, using the meaning to help with spelling. For further research an investigation into the comparison of how semantic processing increases young people's recall in comparison to older people's recall. Different levels of processing may suit different ages. The results may reveal that different levels are more appropriate for different ages. Older people are likely to already have a wider range and depth of knowledge compared to younger people, in which case a lower level of processing may be more sufficient and less time consuming. Whereas with younger people who are at school or college are still in the process of learning and need to remember a great deal of facts to pass exams, so in this case a deeper, more intense level of processing may help the information to sink in and stay in the long term memory ready to be brought back into the STM to be recalled in an exam. It would also be interesting to add in the third level of processing which is acoustic. It would be interesting to see how the results would alter. Some people's preferred learning style involves saying the word or having it played on a tape recorder and so this may increase their recall. Conclusion Semantic processing appeared to significantly increase the recall of words compared to the visual condition. The findings of this investigation have supported the hypothesis and already existing research. Therefore the null hypothesis was rejected. It has also shown that more time was needed to carry out the investigation in order to gain more results from a larger sample and this has proved to be a limitation and something that could be rectified if the experiment was to be repeated. ...read more.