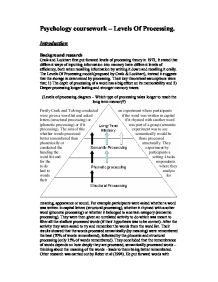 Psychology coursework - Levels Of Processing. Introduction Background research Craik and Lockhart first put forward levels of processing theory in 1972, It stated that different ways of inputting information into memory have different levels of efficiency, both when recalling information by writing it down and recalling it orally. The Levels Of Processing model (proposed by Craik & Lockhart), instead it suggests that the storage is determined by processing. Their key theoretical assumptions were that; 1) The depth of processing of a word has a big effect on its memorability and 2) Deeper processing longer lasting and stronger memory traces. (Levels of processing diagram - Which type of processing takes longer to reach the long term memory?) Firstly Craik and Tulving conducted an experiment where participants were given a word list and asked if the word was written in capital letters (structural processing) or if it rhymed with another word (phonetic processing) or if it was part of a group (semantic processing). The aim of this experiment was to see whether words processed semantically would be better remembered than those processed phonetically or structurally. They conducted the experiment by handing the participants a word list and setting 4 tasks for the respondents to do where they had to analyse words for their meaning, appearance or sound. For example participants were asked whether a word was written in capital letters (structural processing), whether it rhymed with another word (phonetic processing) ...read more.

As I do not have a lot of time to do this experiment I will have to use the opportunity sampling method, this will involve only choosing people who are willing to take part in my experiment however I will still be able to be sure all the participants fall into the age and gender gap if I perform the task in college, where there's a wide choice of participants suited to my age and gender group. If I chose a random sample from the list of available people, I would spend a long time chasing them up as some of the people might have had a lesson or work at particular times on the other hand if I chose a self-selecting method some of the participants might not have been willing to take part. Opportunity sample will insure that anyone that wants to take part will do it when they have time and are not distracted from the task by pressures of wanting to quit. Apparatus * Standard Instructions - in order to save time briefing people * Paper for sums (Exercise 2) - for participants to be enabled to do sums on * Pen - to record their answers * Quiet Room - to annihilate any chances of disruptions * Stopwatch - so I can make sure everyone one gets an equal amount of time not to be biased * Word list - which i prepared from the random words I thought up which matched the questions. ...read more.

One thing I was missing was the ecological validity. Because the experiment was not performed in the natural environment it had low ecological validity which could possibly affect how things are remembered. Validity could also have been affected by how much time people had. The pressure of someone being in the same room with them with the stop watch might have affected their memory in a way; a person might have being trying to concentrate on how fast he can do the exercise instead of how much he could remember and hence forget things faster resulting in anomalous results. Overall the experiment had good face validity as it tested what it was supposed to and came out with appropriate results Improving Validity In order to improve the validity I could conduct a field experiment instead. This way the participant would be caught in their natural environment and are more likely to reflect the natural ability of their memory. Reliability Some participants only remembered 1, 2 or 3 words which were processed structurally which brought the average down quite significantly, making it unreliable as a measure. This was also the case for the deeply processed words; as a matter of fact it was the same participants that had low Improving Reliability Implications of the Study When Craik and Tulving conducted their experiment their results showed that the semantically (deeply) processed words were remembered the best and structurally (shallowly) processed words were remembered much less. ...read more.