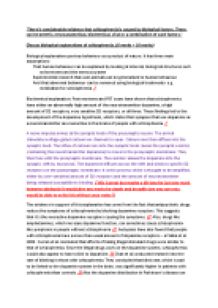 ﻿?There is considerable evidence that schizophrenia is caused by biological factors. These can be genetic, neuroanatomical, biochemical, viral or a combination of such factors.? Discuss biological explanations of schizophrenia. (8 marks + 16 marks) Biological explanations portray behaviour as a product of nature. It has three main assumptions: That human behaviour can be explained by looking at internal, biological structures such as hormones and the nervous system Experimental research that uses animals can be generalised to human behaviour And that abnormal behaviour can be removed using biological treatments- e.g medication for schizophrenia. / Biochemical explanation: Post-mortems and PET scans have shown that schizophrenics have either an abnormally high amount of the neurotransmitter dopamine, a high amount of D2 receptors, very sensitive D2 receptors, or all three. These findings led to the development of the dopamine hypothesis, which states that synapses that use dopamine as a neurotransmitter are overactive in the brains of people with schizophrenia. / A nerve impulse arrives at the synaptic k**b of the presynaptic neuron. The arrival stimulates voltage-gated calcium ion channels to open. Calcium ions then diffuse into the synaptic k**b. The influx of calcium ions into the synaptic k**b causes the synaptic vesicles (containing the neurotransmitter dopamine) to move to the presynaptic membrane. ...read more.

One important thing to note is that amphetamines and some effective schizophrenia drugs alter levels of other neurotransmitters in addition to affecting dopamine, meaning that their effect on schizophrenia symptoms may not be strictly linked to dopamine levels. // Another question is raised by the fact that dopamine-blocking drugs work to reduce dopamine levels immediately, but it can take days for symptoms of schizophrenia to improve. If dopamine levels are directly responsible for schizophrenia symptoms, one would assume that symptom improvement would begin immediately. // Traditionally, the biological treatment of schizophrenia involved ECT and psychosurgery, however nowadays biological therapies involve more scientifically robust methods. For example, the treatment for schizophrenia involves drug therapy. This type of treatment is based on the dopamine hypothesis. Antipsychotic drugs (neuroleptics) work by blocking dopamine receptors. Drug therapy is effective at reducing positive symptoms, e.g hallucinations. It?s successful for a large number of schizophrenia patients, meaning that more people can live in the community rather than being institutionalized. It?s the most widely-used and effective form of treatment of schizophrenia. Almost all other treatments are used alongside drug therapy. Drug therapy isn?t very affective for treating negative symptoms like social withdrawal. It treats the symptoms of schizophrenia and not the cause. ...read more.

they are close with, it is hard to differentiate how much of their behaviour is a result of their environment and how much is caused by genetics. Therefore, other factors need to be considered in order to determine the causes of schizophrenia. // Neuroanotomical: Abnormal brain structure, caused by abnormal brain development, could be the cause of schizophrenia. Johnstone et al (1976) compared the size of he ventricles in schizophrenics brains with non schizophrenics brains. They found that the people with schizophrenia had enlarged ventricles, which suggests that schizophrenia is linked to a loss of brain tissue. Buchsbaum (1990) carried out MRI scans on schizophrenics brains and found abnormalities in the prefrontal cortex. / Evidence against neurological factors include the fact that non-schizophrenics can also have enlarged ventricles, which contradicts Johnstone?s evidence. However, there?s conflicting findings amongst schizophrenic patients too. These findings are correlational, so they don?t show cause and effect. It may be that abnormal brain structure is a symptom of schizophrenia, rather than a cause of it. // 14/24 There are excellent points in this essay I am impressed by the science in the dopamine hypothesis explanation. However you lost your way speaking about the therapy, this made lose marks as it took a lot of your word allowance! Well done this is a great improvement on the last essay! Read the comments ...read more.