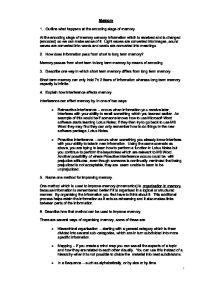 * Proactive interference - occurs when something you already know interferes with your ability to take in new information. Using the same scenario as above, you are trying to learn how to perform a function in Lotus Notes but you continue to perform the keystrokes which are relevant to MS Word. Another possibility of where Proactive interference occurs could be with prejudice attitudes, even though someone is continually reminded that being prejudiced is not acceptable, they are seem unable to learn to be unprejudiced. 5. Name one method for improving memory. ...read more.

6. Describe how that method can be used to improve memory. There are several ways of organising memory, some of these are: * Hierarchical organisation - starting with a general category which is them divided into several sub-categories, which are in turn subdivided into more specific information. * Mapping - if you create a mind map you can see all the aspects of a topic and how they are related to each other visually. You can use this instead of a hierarchy when it is not possible to divide the material into neat subdivisions. * In a Sequence - such as alphabetically, or by size or by time. ?? ?? ?? ?? 1 ...read more.