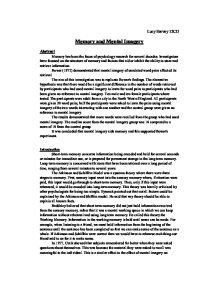 Lucy Harvey 12CD Memory and Mental Imagery Abstract Memory has been the focus of psychology research for several decades. Investigators have focused on the structure of memory and factors that aid or inhibit the ability to store and retrieve information. Bower (1972) demonstrated that mental imagery of unrelated word pairs affected its retrieval The aim of this investigation was to replicate Bower's findings. The alternative hypothesis was that there would be a significant difference in the number of words retrieved by participants who had used mental imagery to learn the word pairs to participants who had been given no reference to mental imagery. Ten male and ten female participants where tested. The participants were adult from a city in the North West of England. All participants were given 20 word pairs, half the participants were asked to learn the pairs using mental imagery of the two words interacting with one another and the control group were given no reference to mental imagery. The results demonstrated that more words were recalled from the group who had used mental imagery. The median score from the mental imagery group was 16 compared to a score of 10 from the control group. It was concluded that mental imagery aids memory and this supported Bower's experiment. Introduction Short-term memory concerns information being encoded and held for several seconds or minutes for immediate use, or is prepared for permanent storage in the long-term memory. Long-term memory is concerned with items that have been retained over a long period of time, ranging from several minutes to several years. The Atkinson and Schiffrin Model was a systems theory where there were three stages to memory. ...read more.

Children have to have parental consent for ethical reasons. Children may have different learning styles to those of adults or the material might be too difficult for some of them. This would have added to the effect of the extraneous variable thus confusing the results. Participants were chosen by means of an Opportunity Sample largely because it was convenient and also because the experiment was to be done on a small scale. The participants were all chosen from the North West of England and a range of occupational groups were included. Ten males and ten females were selected. This counter balanced any effect or gender; for instance, males may react differently to females. Ethics Children were not used in the experiment because they could not give their own consent for participation. Confidentiality was an issue; to overcome this we did not take the names of participants. Another issue was the consent of the participants to take part in the experiment, so each participant gave informed consent. All participants had the right to leave during the experiment and the right to withdraw their results; otherwise this would infringe their ethical rights. Apparatus and Materials (See appendix) Twenty word cards containing 20 pairs of unrelated nouns Lined A4 paper Two pencils A stop clock Procedure Data was obtained by approaching possible participants and asking them if they would take part in an experiment to prove a theory. The same standardised instructions were followed for each participant, read in a 'blank' voice. The brief asked them to help the experimenter with their psychology coursework, (see Instructions 1) and explained briefly that the experiment was to investigate a theory about memory. ...read more.

The mental imagery could then be give a list containing the pairs, as opposed to word cards to eliminate any extraneous variables in the different formats of lists and word cards. The lists might look like this: dog hat horse dress roof tree chair fork ants ..... dog hat horse dress roof tree chair fork ants ball car leaf nail sausage pen fly pig river plate ..... One participant in the experiment commented that she felt pressured by the large number in the distracter task. This could be overcome by changing the distracter task, possibly involving a letter based task as opposed to a number based task. Two participants commented that they felt uncomfortable about their results (despite being told the experiment was to test a theory, not the participant's memory and that all information was confidential); saying they felt they would do better had they been told about the distracter task before the start of the experiment. To solve this, the standardised instruction could include more information about what the experiment involved in the approach. Basic changes to the experiment might include making a representative sample of our town rather than using an Opportunity Sample method of obtaining participants. Also, explaining the experiment in more detail to possible participants before they agree so the experiment is more ethically correct. Conclusion The experiment appeared to support Bower's findings and demonstrated that mental imagery used to learn the word pairs produced higher levels of recall than the control group who did not use mental imagery. However, the results needed to be treated with caution because statistical analysis was not performed and the sample was limited to a relatively small number of adults in the North West of England. ...read more.