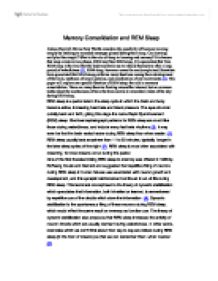 Memory Consolidation and REM Sleep Aldous Huxley's Brave New World considers the possibility of humans learning simply by listening to recorded messages played during their sleep. Can learning really be this simple? What is the role of sleep in learning and memory? It is known that sleep exists in two phases, REM and Non REM sleep. It is speculated that Non REM sleep is the time that the body and brain use to rebuild themselves after a long period of wakefulness (1). REM sleep, however cannot be easily explained. Scientists have speculated that REM sleep performs many functions among them development of the brain, synthesis of neuro-proteins, and coordination of eye movements (1). This paper will explore one specific function of REM sleep: the role in memory consolidation. There are many theories floating around the internet, but no common truths about the mechanisms of how the brain serves to remember events of the day during REM sleep. REM sleep is a period late in the sleep cycle in which the brain and body become active, increasing heart rate and blood pressure. The eyes shudder quickly back and forth, giving this stage the name Rapid Eye Movement (REM) sleep. Electroencephalograph patterns for REM sleep are much like those during wakefulness, and include many fast beta-rhythms (2). ...read more.

Replaying memories over in our heads is the nature of dreams during REM sleep. Opponents of this theory often wonder why don't we remember our dreams if dreaming is involved in memory? The answer is that dreaming acts as the short-term unconscious mechanism by which memories may be delivered to the neocortex (5). We remember the memory, but not how it is delivered. Remembering dreams "...would be the equivalent of keeping a record of manifestations of each night's record keeping. Included in the record of one night's record keeping would be a record of the record keeping of the previous night, which itself would include a record of the record keeping two nights earlier, etc. Keeping such redundant records, which would tend to increase exponentially, would overwhelm our brains with tremendous amounts of useless information (records of record keeping)." (5) Experimental data with animals seems to agree with the functional link between REM sleep and memory. Rats subjected to learning tasks demonstrated increased REM sleep after these tests. This reflects that learning induces REM sleep. In addition, it was found that rats subjected to learning fell into REM sleep faster if they had experienced more trials of the learning activity. A possible explanation of the earlier occurrence of REM sleep may be that as more information is acquired, it becomes more urgent to begin the memory consolidation process (7). ...read more.

The mechanism by which this process takes place is based on the random stimulation of the forebrain by the brain stem, which in turn excites the neurons corresponding to the unwanted memories. The strengths of these individual synapses will be modified during reverse learning so that they will less likely to be activated in the future. The authors of this theory admit that directly testing this theory is difficult, and thus it remains speculative at this time (8). If there is definite link between memory and REM sleep, it has not yet been proven with certainty. However, I believe that such a connection exists. There are many mechanisms through which the brain accomplishes any task. Definitively proving this connection would imply controlling for all other mechanisms by which the memory stores information. Sleep deprivation studies cannot accurately measure the body's memory capacity because other mechanisms will compensate for the loss of sleep. Despite this, there are many studies which do reflect the brain's decreased memory capacity during REM deprivation. This is a good indication that a link exists. I know from experience that sleep effects my ability to perform even the simplest of daily mental activities. Likewise it has not been proven that Aldous Huxley's vision of learning during sleep is valid. Until such theories are proven, I am content in thinking that sleep has an effect on memory. ...read more.

An interesting topic and a challenging essay. Some good points that mainly need development of evaluation.