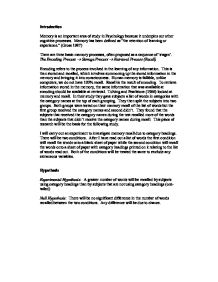 Memory is an important area of study in Psychology because it underpins our other cognitive processes. Memory has been defined as &quot;the retention of learning or experience.&quot;

Introduction Memory is an important area of study in Psychology because it underpins our other cognitive processes. Memory has been defined as "the retention of learning or experience." (Gross 1987) There are three basic memory processes, often proposed as a sequence of 'stages'. The Encoding Process ? Storage Process ? Retrieval Process (Recall) Encoding refers to the process involved in the learning of any information. This is then stored and recalled, which involves summoning up the stored information in the memory and bringing it into consciousness. Human memory is fallible, unlike computers, we do not have 100% recall. Recall is the result of encoding. To retrieve information stored in the memory, the same information that was available at encoding should be available at retrieval. Tulving and Pearlstone (1966) looked at memory and recall. In their study they gave subjects a list of words in categories with the category names at the top of each grouping. They then split the subjects into two groups. Both groups were tested on their memory recall of the list of words but the first group received the category names and second didn't. They found that the subjects that received the category names during the test recalled more of the words than the subjects that didn't receive the category names during recall. ...read more.

Measurement and Analysis To measure what affect the independent variable was having (category headings) the number of correct words recalled by each condition and subject were counted, this being the dependent variable. The measurement technique was reliable as a pre-test was carried out on individuals that weren't involved in the experiment and appropriate adjustments were made to the procedure. When all results were obtained the results from the two different conditions were compared in order to find the difference between the two conditions. In order to improve the comparative analysis of the data the results were then illustrated in the form of a comparative scatter graph and a pie chart. Once the analysis had been carried out the Mann-Whitney Statistical test was used to determine whether there was a significant difference between the two conditions. Ethics The subjects that took part in the experiment were all above the age of consent (16 years) so parental consent was not necessary. Before the experiment began standardized instructions were read out to explain to the subjects that if they felt they were being put under any stress or pressure they could leave the experiment at any time. (See Appendix A for the precise wording of the standardized instructions.) ...read more.

The time taken to distribute the sheets of paper may have interfered with the STM recall. The methodology could be improved by distributing the sheets of paper for recall before the list of words was read out. The subjects were still able to recall words. This may be due to the fact that the list had everyday common words in it, so the path to recalling them from the Long Term Memory (LTM) was strong and easy to use. The category headings in Condition A may have helped the subject to recall more words overall but not correctly from the list of words read out. Sometimes, category headings can help memory recall but can cause one to remember words that weren't read out but can be included under the same category heading. Tulving and Pearlstone (1966) were able to accept their experimental hypothesis. Their study also asked to recall a list of words with category names as the independent variable but they showed their subjects the list of words, visually. This may have had a positive effect on their results. For further work Tulving and Pearlstones' work could be repeated so the list of words could be encoded into the STM visually instead of verbally and the results from the two different experiments compared. ...read more.