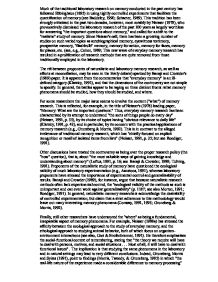 Much of the traditional laboratory research on memory conducted in the past century has followed Ebbinghaus (1895) in using tightly controlled experiments that facilitate the quantification of memory (see Baddeley, 1990; Schacter, 1989). This tradition has been strongly criticized in the past two decades, however, most notably by Neisser (1978), who provocatively dismissed the laboratory research of the past 100 years as largely worthless for answering "the important questions about memory," and called for a shift to the "realistic" study of memory. Since Neisser's call, there has been a growing number of studies on such varied topics as autobiographical memory, eyewitness testimony, prospective memory, "flashbulb" memory, memory for action, memory for faces, memory for places, etc. (see, e.g., Cohen, 1989; This new wave of everyday memory research has resulted in a proliferation of research methods that are quite removed from those traditionally employed in the laboratory. The rift between proponents of naturalistic and laboratory memory research, as well as efforts at reconciliation, may be seen in the lively debate) sparked by Banaji and Crowder's (1989) paper. It is apparent from the commentaries that "everyday memory" is an ill-defined category (Klatzky, 1991), and that the dimensions of the controversy are not simple to specify. In general, the battles appear to be raging on three distinct fronts: what memory phenomena should be studied, how they should be studied, and where. ...read more.

. Most of all, it will have to deal with functional issues" . The implication is that studying the same phenomena in the laboratory and in natural settings may lead to very different conclusions. Indeed, Gruneberg, Morris and Sykes (1991), point to findings (Morris, Tweedy, & Gruneberg, 1985) in which "the real-life nature of the experience made a considerable difference to memory processing" Importantly, however, although the three dimensions--the what, how, and where dimensions--are correlated in the reality of memory research, they are not logically interdependent. For instance, many everyday memory topics can be studied in the laboratory (Neisser, 1991; Roediger, 1991), and memory research in naturalistic settings may be amenable to strict experimental control (Conway, 1991; e.g. Loftus, 1979a). I propose that the everyday-laboratory controversy harbors what appears to be a more fundamental breach--a difference in the very metaphor of memory implicitly espoused by each camp. These metaphors, the storehouse and correspondence metaphors, embody two essentially different ways of thinking about memory and about how memory should be evaluated: The storehouse metaphor, which likens memory to a depository of input elements, implies an evaluation in terms of the quantity of items remaining in store. In contrast, the correspondence metaphor, which treats memory as a perception or description of the past, implies an evaluation in terms of the accuracy or faithfulness of that description. ...read more.

As "metaphorical pluralists," we would advocate otherwise: Rather than attempt to bridge between the two fundamentally different treatments of memory represented in the traditional and everyday memory camps, or perhaps to merge them, we would prefer to see their differences sharpened and cultivated. In that way, each horse will be able to draw the chariot of science, as far and as fast as it can. Consider a simple situation in which memory is tested for only one single item of information using a forced-choice procedure. For example, in the well-known study by Loftus, Miller, and Burns (1978), subjects were required to decide whether the traffic sign in the witnessed event was a stop or a yield sign. In that study and others like it (e.g., Boon & Davies, 1988; Wagenaar & Boer, 1987), memory accuracy is assessed simply by noting whether the provided answer is correct or incorrect. This might be compared to the hypothetical case in which a studied list of paired associates is followed by a single probe and two alternative responses, e.g., "SIGN - STOP/YIELD," and the intention is to assess memory quantity. Operationally, the two measures, accuracy and quantity, are equivalent; the difference between them is solely a matter of the experimenter's intent. Whereas in the former case the test is designed to examine whether the person's memory is a faithful reproduction of the witnessed event, in the latter case the intent has traditionally been to determine whether the designated item is still in store and accessible. ...read more.

The writer could improve upon this work if they used their own words throughout the essay. Quotes are fine but are not to be over used. Also, by explaining research on memory in the writer's own words it becomes clear that they really understand what they are writing about. Because of the over use of quotes and the copying of chunks of the authors' work, the essay will have to be marked down. The writer, however, appears to have got the gist of the research argument and so a simplification of the writing would improve the score.