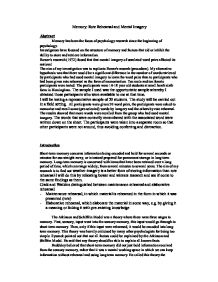 Memory: Rote Rehearsal and Mental Imagery Abstract Memory has been the focus of psychology research since the beginning of psychology. Investigators have focused on the structure of memory and factors that aid or inhibit the ability to store and retrieve information. Bower's research (1972) found that that mental imagery of unrelated word pairs affected its retrieval The aim of my investigation was to replicate Bower's reserah (procedure). My alternative hypothesis was that there would be a significant difference in the number of words retrieved by participants who had used mental imagery to learn the word pairs than to participants who had been given rote rehearsal as the form of memorisation. Ten male and ten female participants were tested. The participants were 16-18 year old students at small heath sixth form in Birmingham. The sample I used was the opportunistic sample whereby I obtained those participants who were available to me at that time. I will be testing a representative sample of 20 students. The study will be carried out in a field setting. All participants were given 20 word pairs, the participants were asked to memorise and recall some (pre-selected) words by imagery and the others by rote rehearsal. The results showed that more words were recalled from the group who had used mental imagery. The words that were correctly remembered with the associated word were written down on the sheet. The participants were taken into a separate room so that other participants were not around, thus avoiding conferring and distraction. Introduction Short-term memory concerns information being encoded and held for several seconds or minutes for use straight away, or is instead prepared for permanent storage in long-term memory. Long-term memory is concerned with items that have been retained over a long period of time, which can range widely; from several minutes to several years. The aim of my research is to find out weather imagery is a better form of storing information than rote rehearsal-I will do this by relicating bower and winzers research and see if come to the same findings as them. ...read more.

The participants were all chosen from the North West of England and a range of occupational groups were included equal number of males and females were selected. This counter balanced any effect of gender. Ethics Children were not used in the experiment as the issue of ethics would have been raised because they could not give their own consent for participation. Confidentiality was a major issue, as that was an important factor to our participants, to overcome this we did not take the names of any of our participants. Another issue was the consent of the participants to take part in the experiment, so each participant gave informed consent. All participants had the right to leave during the experiment and the right to withdraw their results at anytime during the research. Apparatus and Materials 20 copies of the answe sheet (See appendix) word pairs on paper for the experimentor and for the participant standard instruction (appendix) Pencils/pens (more than 1 each so no time is wasted if a pen runs out or pencil breaks) Procedure Data was obtained by approaching possible participants, and I asking them if they would take part in a psychology experiment. The same standard instructions were given and explained to each participant. I then asked them to help us with our psychology coursework, (see appendix) and explained that the experiment was to investigate recall using memory and rehearsal. The participants were told that they would be asked to learn twenty word pairs and that they would later be asked to recall them using different memorization techniques. It was stressed that the experiment was to prove/disprove a psychological theory and not a test of THEIR memory. They participants were informed that their name would not be written down in the coursework anymore, all information was to remain confidential and that the experiment would not take longer than 15-20 minutes. A coin was tossed to see which words the participant would be asked to memorise using imagery and which using rote rehearsal. ...read more.