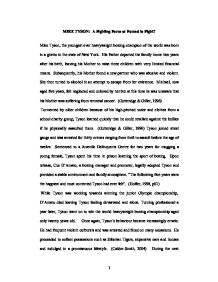 MIKE TYSON: A Fighting Force or Forced to Fight?

MIKE TYSON: A Fighting Force or Forced to Fight? Mike Tyson, the youngest ever heavyweight boxing champion of the world was born in a ghetto in the state of New York. His Father departed the family home two years after his birth, leaving his Mother to raise three children with very limited financial means. Subsequently, his Mother found a new partner who was abusive and violent. She then turned to alcohol in an attempt to escape from her existence. Michael, now aged five years, felt neglected and unloved by her but at this time he was unaware that his Mother was suffering from terminal cancer. (Gutteridge & Giller, 1996) Tormented by older children because of his high-pitched voice and clothes from a school charity group, Tyson learned quickly that he could retaliate against the bullies if he physically assaulted them. (Gutteridge & Giller, 1996) Tyson joined street gangs and was arrested for thirty crimes ranging from theft to assault before the age of twelve. Sentenced to a Juvenile Delinquents Centre for two years for mugging a young female, Tyson spent his time in prison learning the sport of boxing. Upon release, Cus D'Amato, a boxing manager and promoter, legally adopted Tyson and provided a stable environment and family atmosphere. "The following five years were the happiest and most contented Tyson had ever felt". (Hoffer, 1998, p61) While Tyson was working towards winning the junior Olympic championship, D'Amato died leaving Tyson feeling devastated and alone. Turning professional a year later, Tyson went on to win the world heavyweight boxing championship aged only twenty years old. Once again, Tyson's behaviour became increasingly erratic. He had frequent violent outbursts and was arrested and fined on many occasions. He proceeded to collect possessions such as Siberian Tigers, expensive cars and houses and indulged in a promiscuous lifestyle. (Calder-Smith, 2004) During the next decade, Tyson was sentenced to six years for the r**e of a model. ...read more.

However, Tyson could not portray these negative feelings towards his Mother because he depended upon her for food and shelter. From Horney's viewpoint this could be cited as the catalyst for Tyson's subsequent violent behaviour. In short, anyone who provoked Tyson into feeling unsafe, just as his Mother had, was then met with an aggressive reaction. Therefore in support of Horney's theory, the socio-cultural conditions Tyson was raised in had a significant influence upon his behaviour as it forced him into reacting aggressively towards anyone who made his safety feel threatened. Further evidence to support this argument is clear when considering Tyson's treatment towards women in adult life. Tyson was imprisoned for the r**e of one female and arrested for the assault of four other women on different occasions. (Gutteridge & Giller, 1996) Arguably, these females did not respond to Tyson in the way he expected and their rebukes made him feel unsafe or unloved. However, Tyson was now independent, rich and had no need for dependency anymore. This change in circumstances enabled him to react aggressively toward anyone who made his safety feel threatened. This example illustrates the cause of Tyson's unacceptable behaviour when his safety was under threat. Therefore it should be expected from this that a person would behave in an acceptable manner when their safety was not threatened. This concept is apparent when considering the point made by Hoffer, (1998) He stated that Tyson had the happiest and most content years of his life with his adopted Father Cus D'Mato. It is extremely noticeable that Tyson did not find himself in trouble during this particular period in his life. Arguably he felt loved, wanted and special by D'Mato and his family and as his feelings of safety were not under threat, he behaved in an acceptable manner. This illustration goes some way to uphold Horney's theory that a safe and loving environment can have a positive effect on behaviour. ...read more.

Therefore in terms of empirical validity, statistical evidence of research in to the underlying reasons for this type of behaviour from Horney's perspective would be significantly easier to provide supporting evidence for. Freud's theory on the other hand, fails to meet this criterion in this instance as providing evidence for this would be problematic. In conclusion, the question of whether Mike Tyson was an inherently aggressive individual, or whether circumstances and events in his earlier life actually contributed to him becoming the personality type he now is, was the subject of this discussion. Sigmund Freud's biologically determined theory was compared and contrasted with the more humanistic views of Karen Horney. Examples of significant events in Tyson's life were used to discuss both theories. It was suggested that Tyson's abuse of women stemmed from the socio-cultural conditions which he was raised in, rather than the biological demands from his id. This conclusion was reached as it was argued in support of Horney's theory, that even if the id's demands played a role in determining his unacceptable behaviour, it was ironic that the same demands could be controlled in the safe environment of the ring. Freud's concept of the psychosexual stages of development was also raised as this posed the most radical difference in both theories. The question of whether Tyson collected various possessions because he was stuck in his a**l phase or alternately because he had been exposed to a taunted and limited cultural environment was subsequently discussed. It was found from this that providing evidence in support of Freud's theory could prove to be problematic as people's recollections from early childhood may be tarnished. Whereas on the other hand, research in support of Horney's theory is readily available and evidence such as this lends more empirical validity to the Theory. To conclude, the background information presented here from Tyson's early life has been analysed from both perspectives and this discussion has elucidated that Tyson was forced to fight. ...read more.