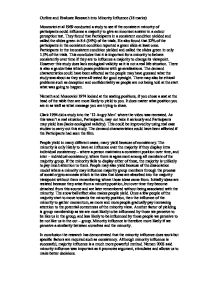 Moscovici et al 1969 conducted a study to see if the consistent minority of participants could influence a majority to give an incorrect answer in a colour perception test. They found that Participants in a consistent condition yielded and called the slides green in 8.4 (34%) of the trials. He also found that 32% of the participants in the consistent condition reported a green slide at least once. Participants in the inconsistent condition yielded and called the slides green in only 1.3% of the trials. This concludes that it is important for a minority to behave consistently over time if they are to influence a majority to change its viewpoint. However this study does lack ecological validity as it is not a real life situation. There is also a gender bias which poses problems with generalisations. The demand characteristics could have been affected as the people may have guessed what the study was about as they were all tested for good eyesight. There may also be ethical problems such as deception and confidentiality as people are not being told at the start what was going to happen.

Nemeth and Moscovici 1974 looked at the seating positions, if you chose a seat at the head of the table then are more likely to yield to you. It does matter what position you are in as well as what message you are trying to share.

Clark 1994 did a study into the ’12 Angry Men’ where the video was recreated. As this wasn’t a real situation, Participants, may not take it seriously and Participants may yield less (lacks ecological validity). This could be improved by using real case studies to carry out this study. The demand characteristics could have been affected if the Participants had seen the film.

People yield in many different cases; many yield because of consistency. The minority is only likely to have an influence over the majority if they display intra individual consistency – where a person maintains a consistent position over time, and inter – individual consistency, where there is agreement among all members of the majority group. If the minority fails to display either of these, the majority is unlikely to pay much attention to them. People may also yield because of the dissociation model where a minority may influence majority group members through the process of social crypto amnesia which is the idea that ideas are absorbed into the majority viewpoint without them remembering where those ideas came from. Initially ideas are resisted because they arise from a minority position, but over time they become detached from this source and are later remembered without being associated with the minority. The snow ball effect also makes people yield. Once a few people of the majority start to move towards the minority position, then the influence of the minority to gather momentum, as more and more people gradually pay increasing attention to the potential correctness of the minority view. Another factor of yielding is group membership as we are most likely to be influenced by those we perceive to be like us in the group, and less likely to be influenced by those people we perceive to be not like us in the out – group. Minority influence is therefore more likely if we perceive a similarity between ourselves and the minority.