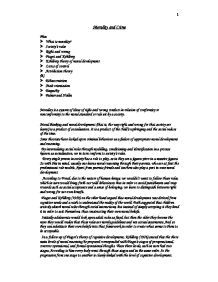 Morality and Crime Plan > What is morality? > Society's rules > Right and wrong > Piaget and Kohlberg > Kohlberg theory of moral development > Locus of control > Attribution theory (B) > Ethnocentrism > Male orientation > Empathy > Palmer and Hollin Morality is a system of ideas of right and wrong conduct in relation of conformity or nonconformity to the moral standard or rule set by a society. Moral thinking and moral development (that is, the way right and wrong for that society are learnt) is a product of socialisation. It is a product of the child's upbringing and the social values of the time. Some theorists have looked upon criminal behaviour as a failure of appropriate moral development and reasoning. By internalising social rules through modelling, conditioning and identification in a process known as socialisation, we in turn conform to society's rules. Every single person in society has a role to play, as in they are a jigsaw piece in a massive jigsaw. So with this in mind, usually one learns moral reasoning through their parents, who are at first the predominant role models. Apart from parents friends and teachers also play a part in ones moral development. According to Freud, due to the nature of human beings, we wouldn't want to follow those rules, which in turn would bring forth our wild behaviours. ...read more.

> One follows a universal principle, but also chooses their own ethical guidelines This theory was developed through asking people about what they would do in certain situations and why. In addition this theory assumes reason rather than impulse as an explanation for criminal behaviour and so it isn't considered as deterministic. Kohlherg believed that offenders have had a delay in the development of their moral reasoning, so that when there is temptation offered, they cannot resist it. They do not have the appropriate internal moral reasoning to do so. Rotter (1975) suggested that our beliefs about causality is usually based upon an External locus of control which reflects a belief that occurrences are a result of external factors such as chance, situation others which are more powerful (aspects which are out of your control). On the other hand an Internal Locus of control reflects a belief that we have control over our choices and actions. The Attribution theory has become a central component of social cognition. It focuses on the explanations that we offer for our own and others behaviour (Heider, 1958). The attribution Error is our tendency to assign internal or dispositional factors in explaining other people's behaviour whilst using external or situational factors to explain our own (Ross, 1997). There are many criticisms associated with Kohlberg's theory, with the first being that of the theory being ethnocentric, mostly typical of western societies according to Eckensberger, 1994. ...read more.

These strategies may also explain why women are less involved in crime. Palmer and Hollin (2000) discovered that self-reported delinquency in young offenders was associated not only with lower levels of reasoning but also with increased tendencies to inaccurate attribution of hostility. For example the blame and responsibility in which we assign to others tend to be harsher in retrospect to ourselves In respect to Rotters suggestion it is said that offenders differ from non-offenders due to their tendencies to use external factors as explanations for their actions in order to divert responsibility from themselves. In my opinion the attribution theory is quite right, as due to the nature of human beings, no one likes to admit that they are in the wrong or they are the ones at fault. As in to us for example, if someone was to trip up over a chair then it was their clumsy fault (internal locus of control), but if it were us who tripped over the chair then it would be because someone placed it there deliberately for us to trip over it (external locus of control). There is no consensus of opinion as to what constitutes a moral act or an immoral act. Formal education and age also seem to contribute to mature moral reasoning, and the effects of the two are sometimes difficult to separate. Adolescents show higher levels of moral reasoning than most children, and lower levels than many adults. 1 ...read more.