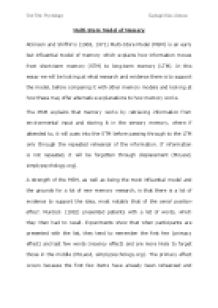 Multi-Store Model of Memory. In this essay we will be looking at what research and evidence there is to support the model

﻿Unit Title: Psychology Kayleigh Giles-Johnson Multi-Store Model of Memory Atkinson and Shiffrin?s (1968, 1971) Multi-Store Model (MSM) is an early but influential model of memory which explains how information moves from short-term memory (STM) to long-term memory (LTM). In this essay we will be looking at what research and evidence there is to support the model, before comparing it with other memory models and looking at how these may offer alternative explanations to how memory works. The MSM explains that memory works by retrieving information from environmental input and storing it in the sensory memory, where if attended to, it will pass into the STM before passing through to the LTM only through the repeated rehearsal of the information. If information is not repeated, it will be forgotten through displacement (McLeod, simplypsychology.org). A strength of the MSM, as well as being the most influential model and the grounds for a lot of new memory research, is that there is a lot of evidence to support the idea, most notably that of the serial position effect. ...read more.

However, the model also has its weaknesses. It could be argued that it is in fact oversimplified and does not explain the full process of how information passes through. It has become more apparent that both LTM and STM are a lot more complicated than previously thought, and could be explained in a better way by looking at Baddeley and Hitch?s (1974) Working Memory Model (WMM). They argue that the multi-stores? idea of STM is far too simple, and that it is not a unitary store as the model might suggest. The WMM describes an alternative version of STM, known as working memory, in which it has different systems for different types of information. There is the Central Executive (CE), which drives the whole system and allocates information to the subsystems, whilst dealing with cognitive tasks such as problem solving and arithmetic. Then there are the Visio-Spatial Sketch Pad (VS), which stores information in a visual or spatial form, and the Phonological Loop (PL), which deals with spoken or written material, such as remembering a phone number (McLeod, simplypsychology.org). ...read more.

Liebermann also argues that the VS subsystem should perhaps be separated into two different components, as the two are not necessarily linked, such as in the case of blind people who have excellent spatial awareness yet no visual information in the first place (McLeod, simplypsychology.org). In conclusion, the Multi-Store model of memory does give a basic insight to how memory works and is the foundation on which many more ideas for memory have been built. However it has now been realised that it is in fact too simple and that alternative ideas such as the Working-Memory model may give a better look into how the information passes through from one system to the other. Both have considerable amount of evidence to support them and strengths and weaknesses of their own but do not focus on more than the passing of information from one storage system to another. Reference List 1. Gross, R (2010), Psychology: Science of Mind and Behaviour, London: Hodder Education 2. McLeod, S (2008), Working Memory, Available online at: http://www.simplypsychology.org/working%20memory.html [Accessed 12 December 2012] 3. McLeod, S (2007), Multi Store Model of Memory - Atkinson and Shiffrin, 1968, Available online at: http://www.simplypsychology.org/multi-store. ...read more.