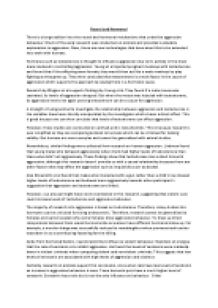 Neural and Hormonal Causes of Aggression

Transfer-Encoding: chunked ﻿Neural and Hormonal There is a long tradition into the neural and hormonal mechanisms that underline aggressive behaviour. Much of the early research was conducted on animals and provided a valuable explanation to aggression. Now, there are new technologies that have aloud this to be extended into work with humans. Hormones such as testosterone is thought to influence aggression due to its activity in the brain areas involved in controlling aggression. Young et al injected pregnant monkeys with testosterone and found that if the offspring were female, they would then act like a male monkeys by play fighting as they grew up. They then concluded that testosterone is a main factor in the cause of aggression which supports the approach by saying there is a hormonal cause. Research by Wagner et al supports findings by Young et al. They found if a male mouse was castrated, its levels of aggression dropped. But when the mouse was injected with testosterone, its aggression levels rise again proving testosterone can be a cause for aggression. ...read more.

The majority of research into aggression is based on testosterone. Therefore, many studies into hormones can be criticised for being androcentric. Therefore, research cannot be generalised to females and cannot explain why some females show aggressive behaviour. To draw up direct comparisons between them would be inaccurate as women have different hormonal make-up. For example, a murder charge was successfully reduced to manslaughter when premenstrual tension was taken in as a contributing factoring for the killing. Aside from hormonal factors, neurotransmitters influence violent behaviour. Davidson et al argue that the role of serotonin is to inhibit aggression. He found the levels of serotonin were markedly lower in violent criminals when comparing violent and nonviolent criminals. This suggests that low levels of serotonin are associated with high levels of aggression and violence. Certainly research on animals support this conclusion, since when rats have low levels of serotonin an increase in aggressive behaviour is seen. Tame domestic pets have a much higher level of serotonin. Serotonin has a role but is not the only influence on behaviour. ...read more.

Research by Blair e al shows that cases where humans have been hospitalised for psychopathic tendencies is often caused by damage to the amygdala. Again, animal studies arise generalisability issues. This approach only focusses on the nature of aggression and fails to consider other factors that could contribute to aggression. Clear research has shown nuture factors such as through the explanation of SLT. The approach also suffers from imposed etic which assumes all cultures are the same. However, research by Deaux suggests that there are cultural differences in aggression and some societies do not display aggression. Therefore this behaviour is not purely biologically developed otherwise we would all show aggression which shows this approach doesn?t account for humans free will to choose to be aggressive or not which is deterministic. In conclusion, it can also be criticised for being reductionistic as it doesn?t consider any other approaches such as psychological explanations. Bandura?s social learning theory suggests that aggression is caused not only by inherited factors but also environmental factors such as reproduction which is copying (aggressive) behaviour they have witnessed. As a result, a multimodal approach may be a more appropriate and holistic way to explain aggression as it considers both psychological and biological factors affecting aggression. ...read more.