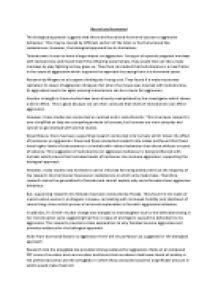 Neural and Hormonal Explanations of Aggression

﻿Neural and hormonal The biological approach suggests that there are Neural and Hormonal causes to aggressive behaviour. This may be caused by different sectors of the brain or hormone levels like testosterone. However, the biological approach has its limitations. Testosterone is seen to have a large impact on aggression. Young et al injected pregnant monkeys with testosterone and found that if the offspring were female, they would then act like a male monkeys by play fighting as they grew up. They then concluded that testosterone is a main factor in the cause of aggression which supports the approach by saying there is a hormonal cause. Research by Wagner et al supports findings by Young et al. They found if a male mouse was castrated, its levels of aggression dropped. But when the mouse was injected with testosterone, its aggression levels rise again proving testosterone can be a cause for aggression. Another strength is these studies have been directly manipulated by the investigator which shows a direct effect. This is good because we can then conclude that levels of testosterone can effect aggression. ...read more.

In addition, R v Smith? murder charge was changed to manslaughter due to the defendant being in her menstruation cycle suggesting that the increase of androgens caused the defendant to be aggressive. This research provides a clear explanation to why females become aggressive and provides evidence for the biological approach. Aside from hormonal factors to aggression there are neural factors as suggested in the biological approach. Research into the amygdala has provided strong evidence for aggression. Raine et al compared PET scans of murders and non-murders and found that murderers had lower levels of activity in the prefrontal cortex and the amygdala. In which they concluded could be a significant amount in which would make them kill. Research by Raine was very well controlled as variables such as gender, age, mental illness and drug taking which makes results more reliable. However, the study lacked methodological issues as there was no control on the level of violence within the participants which means results may only explain some types of violence and not others. In addition, the evidence was only correlational and therefore a cause and effect cannot be established which means we cannot be sure this behaviour is purely biological. ...read more.