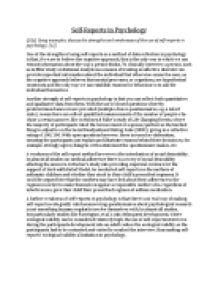 OCR G544 - Using examples, discuss the strengths and weaknesses of the use of self-reports in psychology. (12 marks)

﻿Self-Reports in Psychology Q1)c) Using examples, discuss the strengths and weaknesses of the use of self-reports in psychology. (12) One of the strengths of using self-reports as a method of data collection in psychology is that, if we are to believe the cognitive approach, this is the only way in which we can extract information about the way a person thinks. To clinically interview a person, such as in Ellis? study on Rational Analysis as a means of treating an affective disorder can provide important information about the individual that otherwise cannot be seen, as the cognitive approach believes that mental processes, or cognitions, are hypothetical constructs and the only way we can establish reasons for behaviour is to ask the individual themselves. ...read more.

a Likert scale), researchers can collect quantified measurements of the number of people who chose a certain answer, like in Holmes & Rähe’s study of Life Changing Events, where the majority of participants rated the bereavement of a spouse/partner as the hardest thing to adjust to on the Social Readjustment Rating Scale (SRRS), giving in a collective rating of 100/100. With open questions however, there is room for elaboration, meaning the participants can explain and illustrate reasons behind their decision to, for example, strongly agree/disagree with a statement the questionnaire makes, etc. ...read more.

This is a tightly succinct answer worthy of it's top marks. The candidate does not write an introduction or a conclusion though, as I understand from the exam board (OCR) and exam code (G544) provided, this answer does not require ...

This is a tightly succinct answer worthy of it's top marks. The candidate does not write an introduction or a conclusion though, as I understand from the exam board (OCR) and exam code (G544) provided, this answer does not require either. The structure is exclusively analytical (AO2; critical evaluation), though elements of AO1 (knowledge and understanding) filter through as expected so as to cite important empirical evidence to back up the analysis with proof. The studies sued are all relevant, some more obscure than others and some of which could do with a better explanation, but again, considering the exam requirements after referencing the mark scheme, the brief reference to what the psychologists study (e.g. "Ellis' study into Rational Analysis as a means of treating an affective disorder") is sufficient.

The Level of Analysis is exceptional. The candidate is aiming to identify and explain two strengths and two weaknesses with regard to the use of self-reports in psychology. The candidate demonstrates an excellent ability to do this, as well as a good knowledge of the benefits and limitation of using self-report techniques as a means of gathering information. Each strengths and weakness is backed up why reasons as to why, and is then contextualised in a study that proves what the candidate is saying is right. Each paragraph hear earns the candidate 3 marks, totalling the full 12 marks by the end of the fourth paragraph.

The Quality of Written Communication is very good. The register's suitability to the question is still dubious, as the candidate should be aiming to write as quickly as possible to ensure they finish the exam (only 90 minutes are allowed for G544). And so I might recommend the candidate alter there writing style to a more stark and less elaborate writing style, but this is not something that will affect their QWC mark.