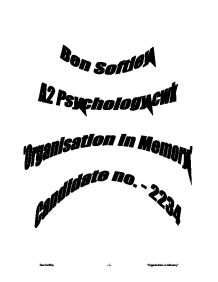 Project Brief PB 1; Statement of hypotheses The aim of this piece of research is to investigate if and how organisation of words affects the memory, i.e. the recall of the words. My experimental hypothesis is: 'The organisation of a group of words will increase the recall' My null hypothesis is: 'Organisation of words will not affect the recall.' PB 2; Explanation of direction of hypotheses This research investigation is being based on the work of many psychologists, such as Bower et al. for example. They found that organisation did increase recall. This is what I am expecting with my results so therefore my experimental hypothesis is directional PB 3; Identification of research method/design To test my hypotheses I am going to use an experimental design. PB 4; Evaluation of the advantages and disadvantages of the chosen research method The main strength of this is that all confounding variables are more easily controlled, such as noise for example. Also, this design can determine a casual link, and also the investigation can be easily replicated. Another strength is that the results will be quantitative, so will be in statistical form. However, as well as strengths there are also weaknesses involved in using this design. First, the conditions that will be undertaken by the participants will not be true to everyday life, therefore the results will not give a true reflection of what occurs in everyday life, and so ecological validity will be significantly decreased. Second, total control over all variables is never possible, for example noise. A third disadvantage of my chosen design is that results are easily affected by many types of bias, experimenter, volunteer and sample bias are examples. Finally, some classes of participants, such as children, react poorly under experimental conditions. PB5; Identification of bias/confounding variables There are many confounding variables that can affect my results when they are collected. One of these that may occur is noise. ...read more.

(1969) used experimenter organisation in their work. They asked participants to learn a list of words, which were arranged into conceptual hierarchies. For one of the groups, the words were arranged into hierarchies, whereas for the other group they were arranged at random. The findings were pretty clear cut. The group with the list of organised words recalled, on average, 65 per cent of the words, whereas the group that were shown the words at random recalled an average of only 19 per cent of the words. The aim of my investigation will be to discover if organisation affects recall, so I, like Bower et al.'s work, will use experimenter organisation. Therefore, my experiment will follow along very similar lines to Bower et al.'s. However, I will use different hierarchies. This is because I am going to use categories rather than loosely linked hierarchies that Bower used. Also, I am going to replicate Mandler's work in terms of the number of categories used, seven. I am going to use thirty-five words - five in each category. I got this value from Bousfield's work, who used sixty words, but I figured that would take too much time. Finally, I will give my participants one-minute to recall as many words as possible. This is based on Bower's experiment. From the research I have conducted, it is quite clear that the organisation that I will impose will increase the recall, so a directional hypothesis will be used. Therefore, my experimental hypothesis is: 'Organisation of words will increase the number recalled' My null hypothesis is: 'Organisation of words will have no effect on the number recalled' Method Design I used an independent measures experimental design. The independent variable of the experiment was the organisation of words and my dependent variable is the number of words recalled by my participants. Participants I used forty participants, twenty of each gender. ...read more.

A good solution to this problem though would be to not experiment on two participants at once, or I could have asked the participants to try not to say the words out loud, although the latter may not have been very reliable. Finally, a modification I would make in the future would be to use a more representative sample of the whole population, rather than students because students memories may be better than the general population because of high intelligence and to good methods of remembering things due to revision for examinations. Hence, I cannot generalise across the whole population that organisation causes and increase in word recall. F4: Implications and suggestions for further research A first implication of my research is that organisation does increase recall, implying that the more organised an individual is the better that particular individual will be able to remember things. An example of this is, in student terms, the more organised a students notes are presented (such as notes being organised into clear and distinct topics) for revision, then they will perform better in the examination. The other implication is of course the opposite of this, the more disorganised a person is, the less likely they are to remember things. Further research that I could carry out would be to consider the difference that organisation has on the recall of males and females. I could carry out exactly the same experiment design and record the gender of each participant (as I did in this experiment) but actually explore the difference between males and females in terms of the number of words recalled. I addition to this point, I could investigate whether organisation affects the recall of different aged individuals. This leads back to a modification that I would make regarding the use of a representative sample. I could use participants from all different age groups, such as adolescent, adult, OAP and so on. By doing this I could produce evidence to show that organisation has greater effect on recall of younger or older people. ...read more.