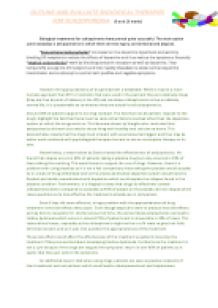 Outline and evaluate biological therapies for schizophrenia (8 and 16 marks)

﻿OUTLINE AND EVALUATE BIOLOGICAL THERAPIES FOR SCHIZOPHRENIA (8 and 16 marks) Biological treatments for schizophrenia have proved quite successful. The main option used nowadays is antipsychotics in which there are two types; conventional and atypical. ?Conventional antipsychotics? are based on the dopamine hypothesis and work by blocking D2 receptors to reduce the effects of dopamine and thus reduce the symptoms. Secondly ?atypical antipsychotics? work by blocking serotonin receptors as well as dopamine. They temporarily occupy the D2 receptors and then rapidly dissociate to allow normal dopamine transmission and so attempt to control both positive and negative symptoms. However the appropriateness of drug treatment is debatable. While it may be a more humane approach than ECT or restraints that were used in the past and they are relatively cheap (they are free at point of delivery in the UK) ...read more.

This would seem to support the use of drugs. However, there is a problem with using placebos as it is not a fair comparison; those taking the placebo would actually be in a state of drug withdrawal and so the previously blocked dopamine system would become flooded and totally overwhelmed with dopamine which could explain the relapses found in the placebo condition. Furthermore, it is illogical to state that drugs do effectively combat schizophrenia when compared to a placebo as 45% of people on the placebo did not relapse which raises questions as to how effective the treatments actually are in comparison. Even if they did seem effective, a huge problem with the appropriateness of drug treatment is the side effects they cause. Even though atypical?s seem to produce less side effects as they bind to receptors for shorter amount of time, the conventional antipsychotics can lead to tardive dyskinesia which occurs in around 75% of patients and is irreversible in 30% of cases. ...read more.

Further issues with the use of medication is that in enforces the view that ?something is wrong with you? which may prevent the individual from thinking about possible stressors that might be a trigger for their condition and this reduces their motivation to look for solutions. A different biological therapy that has been used in the past is ECT. However it is not a mainstream therapy and was abandoned as a treatment after the discovery of drugs. Nevertheless, the idea behind it was that schizophrenia was rare in people with severe epilepsy so they believed that seizures somehow reduced symptoms. However, when ECT was compared to drugs, results favoured the drugs. This therefore highlights the effectiveness of drugs and the inappropriateness of ECT. Overall, despite all the limitations on drug treatment they have shown to improve the quality of life for schizophrenics by allowing them to lead a fairly normal life and they have also been very cost-effective for society as patients can now be treated outside a hospital setting. ...read more.