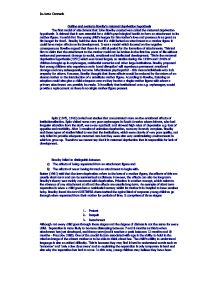 Outline and evaluate Bowlby's maternal deprivation hypothesis The first model of attachment that John Bowlby created was called the maternal deprivation hypothesis. It claimed that it was essential for a child's psychological health to form an attachment to its mother figure. He said that 'the young child's hunger for his mother's love and presence is as great as his hunger for food'. Bowlby held the view that if a child lacked an attachment to a mother figure it could have major effects on its development. It was a model which focused on the negative consequences. Bowlby argued that there is a critical period for the formation of attachments. This led him to claim that the attachment to the mother could not be broken in the first few years of life without serious and permanent damage to social, emotional and intellectual development. This is the maternal deprivation hypothesis (1951) which was based largely on studies during the 1930's and 1940's of children brought up in orphanages, residential nurseries and other large institutions. Bowlby proposed that young children who experience early 'bond disruption' will experience permanent emotional damage and may subsequently become 'affectionless psychopaths' - this means individuals who lack empathy for others. However, Bowlby thought that these effects would be reduced by the return of an absent mother or the introduction of a substitute mother figure. According to Bowlby, fostering or adoption could also give a child adequate care as they involve a single mother figure with whom a primary attachment can possibly be made. ...read more.

There were various reasons to criticise Bowlby's hypothesis. Rutter (1981said that Bowlby was mixing up different kinds of deprivation and also confusing cause and correlation. Bowlby's maternal deprivation hypothesis possibly came from his Freudian training i.e. the infant may be deprived from certain physical satisfactions during development and this may lead to a long-term fixation. Bowlby's attachment theory (1969) was built on ethologists work and used principles of evolution and natural selection to explain the behaviours they observed. Bowlby argued that infants had one special attachment (monotropy). This is the idea that each child has a kind of hierarchy of attachments with one emotionally distinct relationship at the top). The importance of this relationship lies in the fact that it acts as a model for all future relationships. In this case, it therefore means that infants who are deprived of care of responsive and sensitive carers during their early years will be forever emotionally scarred. A child who is securely attached to their mother is not necessarily securely attached to other attachment figures. This suggests that quality of attachment is lodged in the relationship rather than the individual, and challenges Bowlby's concept of the internal working model. The studies carried out in the early 1900's are not necessarily relevant in today's society as things have changed a lot since then, also as the sample was quite restricted i.e. specific area and children of specific back ground, this decreases the validity. ...read more.

The group from institutional care had not developed as much as the others. The had lower IQ's, lower language skills, were less likely to behave and follow social norms and make relationships. The main difference seemed to be the presence or absence of a mother figure during infancy. This Goldfarb suggested explains the difference between the 2 groups. Although this seems to support Bowlby's work, his research was not random and not entirely representative. The problems of the children raised in the nursery were due to a failure to form attachments during infancy. But in part these problems may have been due to the conditions and the children not having the opportunity to form attachments. Babies under 9 months were kept in single cubicles and their only human contact was to be fed and changed. It is not surprising then that they had poor language skills later on. Rutter (1981(makes the point that Bowlby's use of the term deprivation was not precise and was also quite vague. He felt that there needed to be a distinction made between deprivation and privation. Privation is a lack of attachment due to a failure to form attachment between infant and caregiver, and deprivation is the loss of an attachment which has already been made. The distinction between the two is important as each may have different effects. Despite this, Rutter accepted Bowlby's major argument, that early attachment between adult and child is essential for a child to have a healthy psychological development. Jo-Anne Cromack ...read more.